Week 1- Introduction: Our Past is Our Present 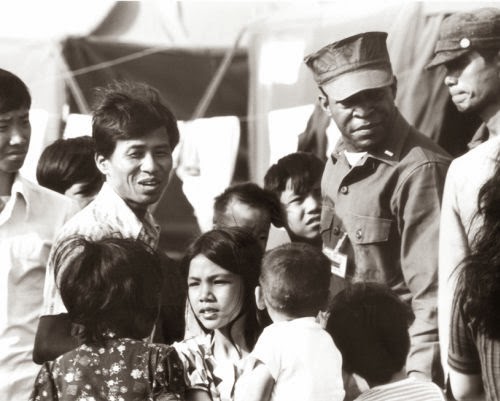 "COMMEMORATION OF THE 50TH ANNIVERSARY OF THE VIETNAM WAR"


On May 25, 2012 the White House Secretary Press released a proclamation by President Obama honoring and calling the Viet Nam veterans a generation of valor and honorable men. As proof, 58,000 names of  US veterans have been etched onto the granite walls of the Viet Nam War Memorial in Washington DC.  It took the US government fifty years after the war to honor the 1.6 millions militants still missing in action and approximately 800,000 surviving veterans (Veteran Today, 2009). While sounding patriotic and morale, the proclamation eluded to address many key issues of the Viet Nam war.


According to Tom Hayden (2013), true recognition and honoring of the Viet Nam War would mean accurately accounting for the devastating impact the war had on the US veterans, their families, Viet Nam and its people.  However, the proclamation neglected to mention an essential player/casualty in the war, the roles of the Vietnamese in the war that bared their name.  Approximately over 3 millions of Vietnamese have been killed, injured, disabled, displaced; and their land, environment and institutions were destroyed by the bombing (Hayden, 2013).


“As of May 28, 2012, through November 11, 2025, the Federal Government will partner with local governments, private organizations, and communities across America to participate in the Commemoration of the 50th Anniversary of the Vietnam War -- a 13-year program to honor and give thanks to a generation of proud Americans who saw our country through one of the most challenging missions we have ever faced” (White House Secretary Press Release).

The patriotic language of, “proud Americans, valor and sacrifice, heroes who suffered…” imbues a strong sense of hero worship and national pride which correlates with a sense of duty suggesting that these men did the right thing  in the war by serving their country.  While in reality the Viet Nam War was met with tremendous civilian antiwar resistance by middle class White, Black, Latino and Asian activists who were fighting against the drafts and the involvement of US soldiers in Viet Nam.  Five generations later, the younger people’s sentiments and historical accounts of the Viet Nam war has drastically shifted.  Recent Gallup poll shows that 51% of Americans ages 18 to 29 believe that it was not a mistake to send US forces to Vietnam; and 34% supported the war, highest level of support for American involvement in Vietnam since 1970 (Hayden, 2013).


For many of the older generations, the historical moment of the war extended beyond patriotism, ‘manhood’, and morality (Hayden, 2013). Thus, the language of hero worship and patriotism may side-stepped the real issues that coexisted with any war: the devastation of the humanistic reservoir on both sides.  For the Vietnamese in diaspora, April 30th is known as “Black April”. For those who felt displaced, it’s a commemoration of those who died due to war and the loss of their country.  Fifty years later, many US veterans are still suffering from physical and psychological distresses.  They are struggling with grief and grievances.  A few were brave enough to confront their past by returning to Vietnam to seek peace and forgiveness; hoping to find it within themselves or  from those they had hurt. Due to the interchangeable flow of capitals and commodities between US and Viet Nam, Vietnamese in Viet Nam have looked past the war and are looking toward to an economic prosperity with a global economy.  Case in point, during the Irag War, President Bush urged people to “go shopping”; it’s just another way US war culture has been normalized (Hayden, 2013).


The Viet Nam war was and still is a multifaceted concept with layers of controversial secrecy, diplomacy, propagandas of a military industrialized complex; thus, even those who were involved did not have a real understanding of the US involvement in Viet Nam or accountable facts about what really occurred in Viet Nam.  Individual experiences and perspectives were radically diverse and convoluted that it became difficult for many who were fighting the war to differentiate between allies and enemies. As a result, many claimed a piece of history by telling their version through their own personal account through the lenses of political, capital or social perspective.  Rather than spinning the truth, those who writes about the war should accurately account for the facts and voices of the people who absent or missing from the conversation.  Commemoration of the Viet Nam war should be about teaching the younger generation the accurate accomplishments, hardship and sacrifices as well as the aberration that have been made. The focus should go beyond the symbolic heroism and patriotism if we want the younger generation to have a meaningful understanding of the cause and effect of war.  Ultimately, we do not want the younger generations to repeat the same historical errors due to elusive facts or by calling it another name.

What's Going on? -- The "We-Win-Even-When-We-Lose Syndrome

Before, I used to believe that the celebration of multiculturalism, emphasis on freedom and democracy, patriotism, and unconditional respect towards American veterans of the Vietnam War were simply traits of American culture. I thought that these traits were not used in any political propaganda or agenda in rewriting the historical narrative of the Vietnam War.  However, after reading Yen Le Espiritu's article The “We-Win-Even-When-We-Lose Syndrome: U.S. Press Coverage of the Twenty-Fifth Anniversary of the “Fall of Saigon,” I realized that the ideas of multiculturalism, democracy, capitalism, and traumatic memories of the war veterans were apart of a means to an end to enforce the American, white perspective of the Vietnam War. Additionally, the increasing sympathy for Vietnam War veterans was used to downplay the US's defeat in the Vietnam War, to conceal the wartime atrocities of the US soldiers against innocent Vietnamese civilians in Vietnam, and to exclude the experiences of Southeast Asians with the war from US history. Moreover, the paired theme of victimized US veterans and liberated Southeast Asian refugees helped the US restore its masculinity and respect of “whiteness,” which were severely weakened by the US’s defeat in the Vietnam War. These tactics, alongside with the mentioned ideas above, portray the United States as the moral leader of freedom and socioeconomic success and the liberator of ethnic groups who originated from another countries (such as Vietnam) that are perceived to be deprived of democracy, safety and financial security.

In Loan Dao's article What’s Going On with the Oakland Museum’s “California and the Vietnam Era” Exhibit?, erasure of Southeast Asian experiences  and exclusion of artifacts that realistically depict the Vietnam War --such as military weapons and graphic photographs of the wartime atrocities committed by US soldiers -- reinforce the white, American retelling of the Vietnam War in a power play. However, by restricting the exhibit organizers from showing the violent, gory essence of the war, the board (who were majorly White American at the time) of the Oakland museum also concealed the details and truths of the wartime atrocities committed by US soldiers. According to the documentary Vietnam Holocaust, US soldiers couldn't fight effectively against North Vietnam’s guerrilla forces, which halted the US military’s statistical reports for numbers of Viet Cong killed. The US army needed human corpses that could substitute the North Vietnamese soldiers in these casualties reports. Only then could the US military continue to fight in the Vietnam War. Therefore, the US soldiers mutilated and killed “anything that moved, which ended up to be Vietnamese villagers (from babies to the elderly) from the North and the South. Yet, by the keeping the bloody atrocities and Vietnamese genocide withheld from the public,  the board of the museum also promotes the idea that Vietnamese immigrants should be grateful for being saved from communism by US troops.

On another note, in  “We-Win-Even-When-We-Lose Syndrome . . . .” and What’s Going On with the Oakland Museum’s  . . . . , the United States has used propaganda that contrasts the financial, academic success of Vietnamese people assimilating to American culture to the destitute state and low socioeconomic status of Vietnamese civilians remaining in Vietnam after the Vietnam War. Yet, I was surprised by how Vietnamese Americans were seem as members of the model minority stereotype on the condition that they were anti-communist. This social phenomenon shows that the United States didn't waged a war against North Vietnam. The US as the symbol of democracy and capitalism declared war on all international agents of communism; the US is also the imperialist of democracy and freedom as well.


Questions:1. According to Yen Le Espiritu's article The “We-Win-Even-When-We-Lose Syndrome: . . . . ,” an interracial relationship between a Vietnamese person and a person outside of their ethnic group can be seen as a symbol of freedom of the US. In the context of the United States’ involvement in the Vietnam War, are there hidden, deeper meanings, functions, or propaganda behind the US's promotion of interracial relationships and multiculturalism? For instance, how can multiculturalism and the choice to interracially date (or marry) promote America's “moral authority of U.S. leadership on the world stage” (Espiritu)?
2. If the wartime atrocities of US soldiers against Vietnamese veterans could be exposed to the public, how would the evidence of these atrocities change the perception of the United States as a liberator of Vietnamese people? 3. For Vietnamese Americans, what are the pros and cons of knowing the truthful account of the US soldiers’ inhumane actions and involvement during the Vietnam War?  4. How would this knowledge affect the identities of Vietnamese Americans? 5. In the case of the Oakland Museum exhibit "What's Going on? -Vietnam Era," what are the alternate methods of informing the public about Southeast Asian experiences and perspectives of the Vietnam War (besides a museum)?


How did the US get involved in the Vietnam War?

Posted by Jennine and Leslie
Posted by Unknown at 3:20 AM