Cathy J. Schlund-Vials’ book War, Genocide, and Justice: Cambodian American Memory Work, explores the different methods of Cambodian American remembrance of the genocide inflicted during the Khmer Rouge reign. By dissecting the effects of the phenomenon of atrocity tourism, the writing of conflicting and controversial memoirs, and the reproduction of Cambodian experience through music and film, we notice that Cambodians are trying to reclaim their slowly fading and controversial history in order to extract justice for the loss suffered during the Killing Fields Era, which never received its proper closure. Schlund-Vials also combats the state-sanctioned forgetting and re-writing of the Killing Fields Era so that future generations of Cambodians, and indeed of the entire world, will properly acknowledge the history of the Cambodian genocide.
The introduction provided by Schlund-Vials gives a thorough summary of the Khmer Rouge era. It includes explanations on how the dissatisfaction with the previous Lon Nol dictatorship spurred popularity for the Khmer Rouge Regime, allowing them to come into power. However, the Cambodians put faith in a group with a biopolitical and necropolitical agenda that required the mass murder of their own people. Schlund-Vials goes on to provide a brief history up to the final Vietnamese push to oust the Khmer Rouge Regime.
Once in power, the Khmer Rouge committed its three year reign to purging more than 1.7 million Cambodians in order to achieve their goal of completely wiping any western influence from their country (2). The Khmer Rouge wanted to reset their country back to year zero in order to re-establish a country as idealistically grand as the Angkor Kingdom (1). Their view was that they didn’t need any outside influence to make a great country; however, that meant Cambodia would not keep up with the changing world which is something the world could not ignore.
The atrocities inflicted on the Cambodian people under the Khmer Rouge regime have created a lasting wound in the history of Cambodia. As such, every year Cambodians go into Phnom Penh National Olympic Stadium to commemorate the day Vietnamese forces entered the capital city and ousted the Khmer Rouge from power known as “Victory over Genocide Day or Nation Day” (4). There is a significance in transitioning the stadium from its former use as an execution center for Lon Nol officials in the early days of the Kampuchean regime to a place of genocidal remembrance (5). Although the the stadium is the most symbolic site for remembering the genocide, there are many other sites littered throughout Cambodia which is a reminder to everyone of the extent of the genocide that occurred during the Khmer Rouge era.
Looking through all of the brutality and horrible events that occurred, the Cambodian genocide of the Killing Fields era rivals that of the Jewish genocide during the Nazi regime. This begs the lingering question of why this atrocity isn’t well-known. It is believed that “60% of Cambodia’s population was born after the end of the Democratic Kampuchea regime” which contributes to the disbelief that the Killing Fields Era actually occurred (7). Reinforcing this is the fact that only one person was actually tried in court for humanitarian crimes, even though there has to be more people that should be accused. To top it all off, there is even a Khmer Rouge official still in the Cambodian government. So why is there no distress or commotion about these issues that are still present? Two logical answers include the tactical forgetting of the Khmer Rouge which was enacted by the U.S. government and the Cambodian Syndrome. The Cambodian Syndrome is just like the Vietnam Syndrome discussed in class that implements tactical forgetting and strategic remembering which work together to mold history into a new shape.
The last thing the the introduction discusses is U.S. involvement during and after the Khmer Rouge era and the U.S. point of view. First of all, the US actually passively supported the Khmer Rouge because the U.S. was still bitter about the recent outcome of the Vietnam War. Secondly, from the perspective of the U.S., Cambodia was simply another refugee hotspot that was another burden for them since there were still masses of Vietnamese refugees coming into the U.S. Lastly and most importantly is how U.S. ambassador Hillary Clinton viewed the Khmer Rouge period through a tour of a genocide museum in Cambodia. She exclaimed that she was impressed that Cambodia was able to confront its past and overcome it (9). I personally believe this is not the case because much of the population was born after the genocide and don’t have the complete experience of the Killing Fields. Instead, there needs to be remembrance of how exactly the people were killed and why those people were killed. Simplifying death makes every death a statistic.
Chapter 1 of War, Genocide, and Justice goes through the harsh history of the Tuol Sleng Prison 21 (S-21 in short). The purpose of this school-converted max security prison was supposedly to “guard against the strategy and tactics of the enemy” (28). But the true intent of S-21 was for torture, extracting confessions, and ultimately for executions. The method of luring them into this hellhole was done by rounding up people accused of “engaging in pre-revolutionary behavior”. To attest its effectiveness, of the ~13,000 detained, less than 20 survived and only 7 are thought to be alive now (29). Currently, S-21 Prison is a tourist destination for people that want a feel for what it was like to be in this place. Tourists are virtually allowed to go anywhere they please; however, most follow the path into the prison as if they were in the prisoner’s shoes. Throughout the experience, the visitor must be asking himself/herself of what the prisoners must have been thinking about when they walked towards the prison looking at the sign with the security regulations. 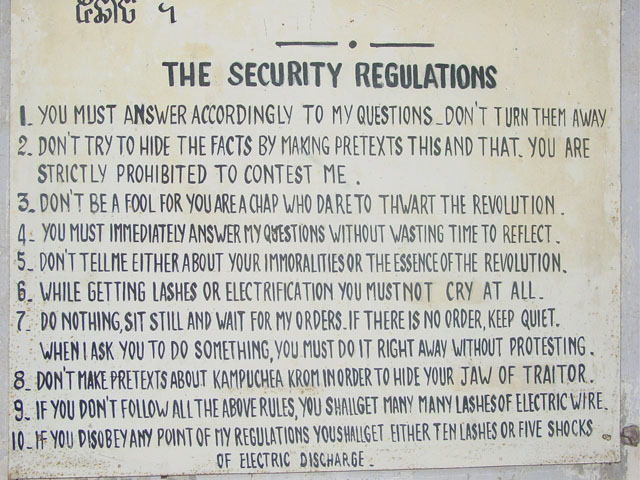 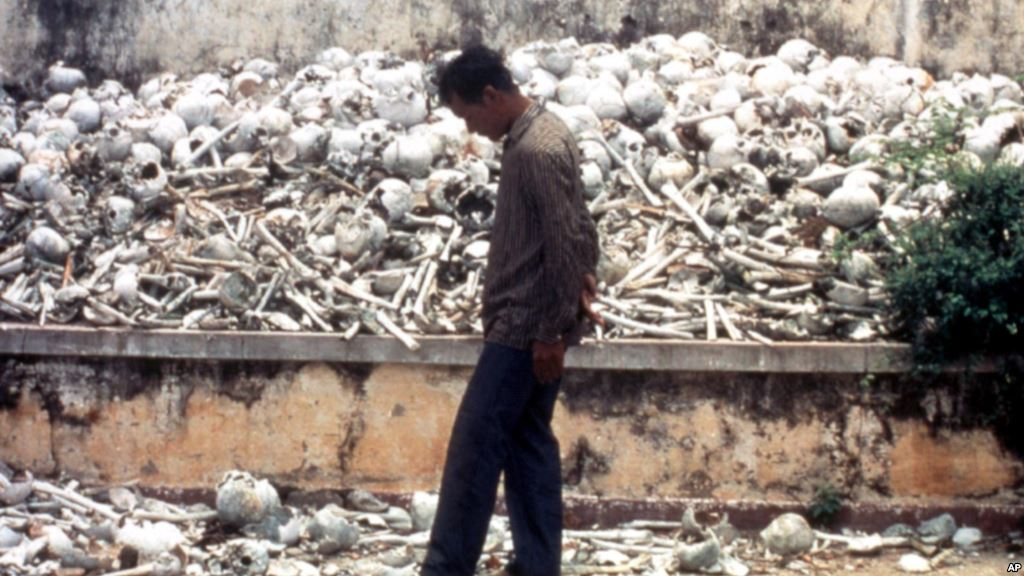 War, Genocide, and Justice: Cambodian American Memory Work serves as a way to not only remember the past, but to combat the state-authorized forgetting of it as well.  Just like praCh’s music, Poeuv’s film, and Ung’s memoir, Schlund-Vials seeks justice against a systematically racist society, politically corrupt agendas, and a sense of “letting the past go”.  She argues that the past simply cannot be let go and that trying to forget is the same as injustice. The generation of Cambodian immigrants that have no recollection of their past still have something missing in them and it is this past that may come to haunt them. In forging a legacy of remembering for Cambodians, Memory Work tries to convey a message of justice that still needs to be answered. With such an obvious lack of justice, one is left to consider why no real action has been taken to give Cambodians a sense of closure for their genocidal history. After the Jewish genocide of World War II, it only took four years to bring the Nuremburg Trials to a close. This swift juridical action gave legitimacy to the suffering of the European people and afforded a sense of justice and closure. In comparison, it is has been 38 years since the fall of the Khmer Rouge and the Khmer Rouge Tribunal trials are still ongoing. Only through the collected works of awareness and remembrance, such as in Schlund-Vials’ Memory Work, can we hope to someday give a sense of peace to those affected by Cambodia’s genocidal history.