Week 1: Introduction: Our Past is Our Present

Noreen Baloch
Vincent Dinh
Linh Ngu
Introduction: Our Past is Our Present

1. How has revisionism of the Viet Nam war affected the narratives of the war?

3. How does this we-win-even-when-we-lose narrative affect the representation of groups that were involved in the war?

4. Do you think it is important to separate a political agenda and sentiments on a war from American troops? Do you think the answer varies in reference to the current situation in the Middle East and the Viet Nam war?

The Viet Nam War was a war that occurred in Viet Nam, Cambodia, and Laos from November 1st, 1955 to April 30th 1975. Even though it is named the “Viet Nam War” in popular literature, it affects many different ethnic groups of the region because American involvement was not limited to Viet Nam itself. The groups affected by the Viet Nam War include Southeast Asians, Indochinese, Vietnamese Americans, Cambodian Americans, and Laotian Americans (Hmong, Mien). Southeast Asians, or also Indochinese, are people of Cambodia, Laos, Burma, Thailand, Malaysia, and Viet Nam. These groups have been mostly studied and written about through the literature of countries that colonized them, until the Viet Nam War.
The Viet Nam War was the first ever televised war, and this brought in a new human experience to the faraway countries that Americans soldiers were fighting in. Even though this publicized all of the human sufferings that happened during the war, the focus was on the American experience. It is important at this time, especially as the 40th anniversary of the end of the war draws close, to reconsider the diverse groups that the war involved, both in Southeast Asia and in America.
The documentary “Vietnam: American Holocaust” shows a different side to the mainstream viewpoint of America’s involvement in the Viet Nam War. In history books and governmental efforts to commemorate the war, Americans have always been valorized as the “good guys.” However, in the documentary, we get to see many first hand experiences of the atrocities and disregard for civilian lives during the war. The soldiers would play “games” in which they would trivialize civilian’s lives and homes. One soldier attested to the practice of counting ears as trophies for the kills. This represents a different viewpoint of the supposedly heroic and selfless American soldier.
Many Vietnamese civilians were confused and angry at the war atrocities that took place. The war survivors who were interviewed recounted seeing their families and homes destroyed by American soldiers. This is why it is important at this time to reconsider the diverse groups that are involved in the war. The suffering of Vietnamese civilians continue until today from the effects of chemical warfare, such as Agent Orange, the herbicide that caused birth defects.

“What’s Going on with the Oakland Museum…”
This paper’s goals were to assess the ways in which the exhibit was organized, and the exhibit itself. In its assessment, author used approaches such as interviews with museum reps, Southeast Asian consultants, and involvement and discussion in a focus group comprised of 2nd-generation Vietnamese Americans. Through this, the processes of museums as structural re-enforcements of hegemonic cultural and political agendas could be observed.
According to Michael Klein, the American war in Southeast Asia is divided up into 3 narratives:
1.   1970s Cold War stereotypes of Asian “yellow peril” and communism
2.  1980s alienation of American veterans as victims
3.  mid 1980s- 90s, war being justified as a necessary and beneficial, for a cause
Post Cold-war revisionism led to an image of the war being a tale of Good vs. Evil, democracy against communism, dodging the underlying imperialistic war motives.
Additionally, diverse and dynamic peace movements during Viet Nam war was conflated into one mesh as a singular movement, defined mainly by middle-class white youth. Stories of oppression and struggle during the war became re-etched into American democracy ‘in action’, and wartime refugees in America became the basis for the successful model minority myth. USA’s framing of the Viet Nam War into the American version has greatly influenced the general perspective and narrative of the war by manipulating the many voices of the Vietnamese, Cambodian, and Laotian communities affected.

“Even When We Lose We Win”
It is paramount to question public recollections and rememberings of the US war in Viet Nam.
The Viet Nam war, “the war with the difficult memory”, is being rewritten as “the good war” in which US militaristic interventions are being validated and valorized, even though it was essentially a fruitless war. Fruitless in that the US was neither the victor or the liberator, yet American media turned and popularized the Vietnamese refugees into the myth of “Rescue and liberation”. Article identifies two narratives: One on innocent and heroic Viet Nam veteran warriors, and the other a liberated and successful Vietnamese refugee model.
Author of this article wants to juxtapose these two overarching narratives, instead of having them be separate entities. With these two narratives juxtaposed and compared in analysis to the cultural legitimation of the war, certain things come to light. Vietnamese veterans and Viet refugees joined into one field of study, where together they can garner validity for the US as savior of the Vietnamese “runaways”.
At the crux, this win-when-we-lose mentality taken on by US of A acts as an organized forgetting of a war that “went wrong”. This attitude has only driven and perpetuated US militarism.
“By studying the constructions of the Vietnam veterans and the Vietnamese refugees together and in relation to continued U.S. militarism, I draw on and bring into conversation three oft-distinct fields: American studies, refugee/immigration studies, and war/international studies.” - from article.

President Obama “Commemoration of the 50th Anniversary of the Vietnam War”
President Obama delivered a Memorial Day speech in which he expressed sympathy for veterans as means of rehabilitating the Viet Nam War. It is interesting to note that most declarations regarding the Viet Nam War emphasize the necessity of upholding strong American values and allowing this nation’s “let freedom ring” mantra run rampant throughout a world our country has shaped under the influence of capitalism entrepreneurship. Soldiers unlawfully occupied a land that was in NO need of American aid at all. Obama goes on to say: “We pay tribute to the more than 3 million servicemen and women who left their families to serve bravely, a world away from everything they knew and everyone they loved.” In total, the speech is merely a platform to commemorate an unlawful occupation of many soldiers who helped enable a mass genocide on innocent people. When one thinks of the word “commemorate” they believe it means to honor somebody, but only one party is being honored--and not even the victimized party is being honored. When America recounts the Viet Nam War it should be to commemorate the thousands of lives lost by innocent civilians in Viet Nam.
The Viet Nam War has many parallels to the wars in Iraq and Afghanistan and the more recent illegal occupation of Palestine by Israeli forces. When Obama first entered his presidency, he understood the significance of upholding a strong domestic agenda. During Lyndon B. Johnson’s presidency, international affairs (the Viet Nam war) overshadowed domestic issues and Obama recognized this as erroneous and desired to not make these same mistakes. Obama’s speech highlights a very patriotic point of view that does not allow an analysis on whether he supported the war or not. However, given his political agenda I assume he disagreed with this era in history. It is very important to note that the politics of war should not detract from support for those who wage it. While it has been documented that some of these soldiers were cruel and horrendous, many of them genuinely thought they were performing civic duty and necessity. While it was necessary that Obama honored those who lost their lives in the line of war, I only wish he had also commemorated the innocent people who lost their lives in Viet Nam as well. I am sure Obama believes the Viet Nam War was a mistake given his platform and many people know in war there are horrible people, but also innocent people (on both sides of the war) as well. I truly wish he would have acknowledged the loss and continual loss Viet Nam faces today. Individuals may support a war or not support it, but we should acknowledge people who were placed in harm’s way. 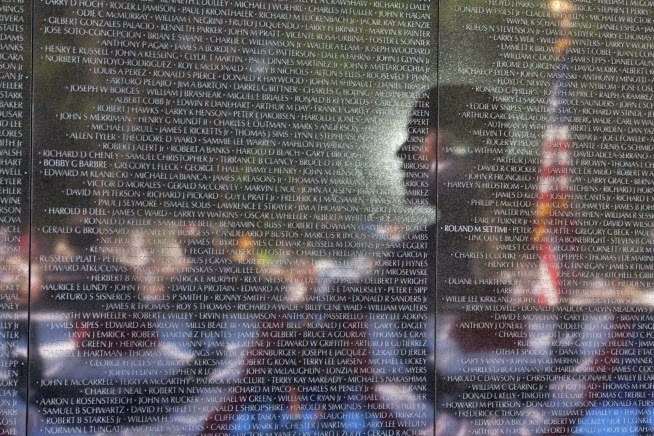 Photo Courtesy of The White House. Obama’s silhouette against the Viet Nam War Memorial during his commemorative speech.

Tom Hayden “Commemorating the American War in Vietnam”
American patriotism is one of the strongest aspects of United States history. It is emphasized again and again that we live in a powerhouse nation. A nation that emerged righteously from the grasps of imperialistic European powers and one that had never engaged in a war and lost. America’s raw power was a fundamental aspect of the “American Dream.” One nation challenges this falsely perpetrated notion of America—Viet Nam.
America entered the Viet Nam War after much political and economical debate, but ultimately entered under the pretense of protecting the rest of the world from the impending threat of communism. The war was supposedly lost due to “civilian interference” and thousands of American citizens who protested against the war (interestingly enough when one thinks of the Viet Nam War they generally recall the American public’s lack of support for the war and the many protests waged by supposed hippies). The article goes on to say, “In the end, the US withdrew. Military defeat was a huge blow to imperial pride and self-confidence. It caused a prolonged crisis of confidence in the military…” Many Americans had not taken too kindly to this loss and more than three times the amount of bombs dropped in World War II were dropped in Viet Nam.
This war, though often glossed over in history books, and rarely discussed had a monumental impact on America, Viet Nam (Viet Nam still suffers TO THIS DAY because of lasting effects on civilian’s health due to chemical warfare), and the surrounding nations in Southeast Asia. The article also proceeds to highlight that the mid-1990’s were an important time in America’s history because many minorities—whether a racial or sexual minority—gained enough courage to allow their voices to be heard. While “hippies” and students are often cited as being the main anti-war groups, many minorities (African-American’s and Latino’s) also did not support the war. Interestingly, those minorities who were deployed in Viet Nam are often not as recognized and commemorated as their white counterparts. Machtinger succinctly summarizes the essence of his speech in a single paragraph:
There’s much more to say, but even as it is important to talk about the effect on Americans, it’s worth remembering that the Viet Nam war took place in Viet Nam, not in the US – though it would be hard to tell that from the American postwar reaction – academic, political, or cultural. The narrative is of American rather than Vietnamese trauma. For instance, in how many movies, even antiwar ones, does a Vietnamese get to speak meaningfully?


America is stuck in the past and many citizens forget that the war was not our trauma, but deeply and psychologically affected people on the other side of the world. Our country must move forward and can do so if it simply acknowledges the war we waged in Viet Nam was a fool’s mistake.
Posted by Unknown at 8:23 AM