Brandy Worrall-Soriano. “What Doesn’t Kill Us.”
This novel introduces to readers a narrator (Brandy) who identifies as Vietnamese and American ("Amerasian"). Her mother left Viet Nam with her father (Viet Nam War veteran) on a whim at the end of the Viet Nam war. Brandy and her mom does not get along-- not even after she got married and moved out. She constantly ponders and resents her mom's harsh words and constant nagging. Her father was diagnosed with post-traumatic stress disorder due to his experiences in the Viet Nam war. His life now consist of taking pills, drinking, and drugs. Throughout her life, Brandy never understood how her parents experience in the Viet Nam war really shaped the people they are currently. This mentality starts to change when Brandy becomes diagnosed with stage III breast cancer at the age of 31. She battles an emotional battle that consist of trying to accept her new life and fate along with enduring a 6 month chemotherapy trial. As she is going through this battle, Brandy starts to make connections between her current state and the one her parents were in living through the Viet Nam war-- it was a connection in which all three were forced to face the possibility of death at a young age when those around them did not carry the same fate. This rare moment and the conditions her parents had endured in the Viet Nam war stimulated Brandy's desire to find connections between the war and her current sickness.

Although this novel is written in a very personal tone, I believe it serves its purpose of making the Viet Nam war seem more real than what is usually written in history books. We always hear about the enormously high death rate in this war and how its after effects has caused birth defects, mortality, and sickness in the children of those in the war, but these unfortunates are just words on a paper until we can put a story to it. This is exactly what Brandy Worrall-Soriano's book did-- it brought alive a world which seemed so unreal and unimaginable to many in today's society. This book hilights the hardships that exists in the relationship of people who fled Viet Nam and married war veterans. The relationship is nothing close to the happy endings that are usually portrayed to Americans -- a happy ending where the vietnamese women are lucky to have been allowed to come to America. In reality, these women sacrificed and left their entire lives back in Viet Nam with them as they begin their new lives in America. The people and things they left behind constantly comes back to haunt them. This novel also exposes the chemical warfare that took place during the Viet Nam war. This significant factor tends to be omitted from most history book, but yet it is a crucial factor in the war and its effect is still affecting the lives of those living through the war and the lives of their children. Through Brandy's memoir, we are able to see the effect chemical warfare yield on her -- due to her parents exposure to Agent Orange and other chemicals during the war, Brandy has stage III cancer -- something that is not common for people of her age. This diagnosis served as a turning point in Brandy's life because it allowed her to connect and understand her parents on a deeper level, but it also serves as a warning for readers. Her cancer is a reminder to us that the war may have ended, but it is still affecting the lives of those who were not directly involved in it-- in another perspective, it is a call for us to be more aware of what is happening and do our part to make sure nothing like the Viet Nam war will ever occur again.


Classification is achieved by careful observation of the type of Vietnamese American the individual is and how he/she responds to the above questions. Saying the "right" thing could allow an individual to be placed in a higher rank than when saying the "wrong" things. Not only are responses important to an individual's social ranking, physical appearance also plays a big role. To be critical would be to say that this is not a proper way to judge anyone, but in reality this form of racism existed and continues to be prevalent throughout society. The ten questions mentioned above are common questions asked by the Vietnamese community to determine where a Vietnamese American individual stands, but I would argue that there are more factors that go into classifying an individual. I believe demographics play a large role in determining how Amerasians/ Vietnamese Americans are viewed. Yes, it is true that there are large concentrations of Vietnamese American in the Bay Area cities (as studied in this article), but taking that most of the interviewees were from one area does
not give us a diverse sample of people from different areas. It could be that people in this region tend to exhibit similar attitudes which draws them to reside in close proximity to each other.

How Groups are Forgotten and Made Invisible
Over the course of history, the process of settler/colonialism and imperialism demonstrated and constructed the power of wealthy nations and the genocide of the indigenous. We see this in terms of the Cham people (as discussed by Julie Thi Underhill). The Cham people is an indigenous people that occupied the coasts of Viet Nam, but were overpowered by the Vietnamese. Throughout history, the Cham people were forced to moved further and further inland away from their trading markets on the borders of Viet Nam. Not only were they forced from their land, but many were forced into slavery. By encroaching on the Cham's land, the Vietnamese are saying that these people are not deserving of the nation's land-- henceforth reducing their legitimacy as a people. This is because people are (should) be given property rights which the Vietnamese are implying that the Cham are not entitled to-- demonstrated by the heartless encroachment on the Cham's land. Not only does that degrade the legitimacy of a group, but they go further and enslave them (another form of demoralizing that leads to the eventual eradication of a group-- either physically or by memory). That is how settler/colonialism work as a genocidal process that aims to erase indigenous populations. Henceforth, groups are forgotten and made invisible through the military domination and subordination of their enemy in order to steal and claim "unoccupied" land. It is through the erasure of the Cham that creates the image of land being "unoccupied" which gives the Viet Namese government more reasons to quickly steal and control the land and the people who are suppose to occupy the land. The power plant plays into genocide because the Cham have been pushed to the margins of their own homes and the environmental impact of the power plant can kill those who are standing around them. 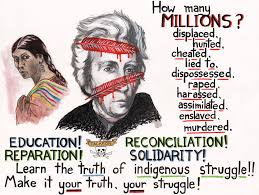 This image represents the struggles of indigenous and the process of settler/colonialism. It becomes our duty as "settlers" to advocate for the indigenous since we are occupying their land as a settler. For  the Cham, the Vietnamese should also work towards this because they stole and occupied indigenous land and people. Reconciliation for the marginalization of the Cham is very much needed and yet the Cham are continuously displaced.

Ways in Which US Military Industrial Complex Operates During Occupation
There are similar patterns in how the United States comes to occupy a nation. It seems that the justification for coming into a nation is also either an attack on the American people or there is a group in the other country calling for help to overthrown their government (which is usually communistic). This "attack" used by the American government to justify their incoming into a country has been, according to many cases in history (ex: Gulf of Tonkin), false. The Americans then come into this country claiming that they have "good" intentions to help the people of this other nation. But in reality, the US has made its way into this host country out of selfish goals and intentions that all lead back to gain politically and economically advantages .Take the Gulf of Tonkin incident for example, the US claimed that one of their ship has been attacked by a Vietnamese ship while at sea. This allowed and justified increased American involvement in Viet Nam. Once justification is yielded, the US begins to send troops and militaries into the target nation (in this case Viet Nam). From then, the occupation strategies that takes place usually aims to gain support of at least one group in the target country, manipulation of the public, and plundering resources for the benefit of the US only.

Lasting Legacies of the War (not well known and discussed)
One topic that is rarely discussed and is not well known is that the war led to the separation and segregation of the Vietnamese people. There were a lot of ideas and negative perceptions of the Vietnamese "refugee population." This group of people were demoralized and dehumanized for being refugees; the word refugee carried a negative connotation with it which further increased hostility towards these people. The war also led to the creation of a hierarchy scale that placed the refugee Vietnamese at the bottom just because they were victims of war trying to flee (out of Viet Nam). The ending of the war (the Fall of Saigon) also caused economic and political hardships in Viet Nam causing it to become one of the poorest countries in the world. In America, better treatment was afforded to those individuals who appeared "less Vietnamese," or to those who were deemed "Amerasians." In addition, Americans also imparted the "child of war" stereotype which is prejudice of children that are not "americanized" and can "look" like a child of parents who refugees. But, if the Viet Nam War never took place, it can be safe to say that this stereotype would not exist among Americans as well as Vietnamese-Americans.