1.     One ethnic solidarity was the multiple ethnic enclaves which were developed as a consequence of the war. These enclaves provided a sense of belonging in a their respective ethnic community away from their homeland. They also provided a smooth resettlement process with the services (employment, housing, paperwork, food, water, belonging, etc.)  these ethnic enclaves offered.
2.     The Viet Nam War caused colored people to be more active and involved in ethnic movements, such as the Black Panther Movement. For example, Richard Aoki, a third generation Japanese American went sent to a concentration camp as a young boy. At this young age, he witnessed the injustice dealt upon colored people. This acted as a motive to be actively involved in the Black Panther movement, so he can fight against injustice for colored people. The Black Panther Movement also occurred near the time when the Viet Nam War occurred.
3.     The Viet Nam War can be reconsidered in several ways: the United States aggressive dominance portrayed to foes, publicizing the perspectives of those who were forced to flee from Southeast Asia, documenting the “American” and Southeastern perspective in textbooks and media, excessive use of force and weapons from U.S.
4.     The Viet Nam War remains a salient issue due to the long-lasting effect on the economic, political, social, and physical consequences. Refugees arriving in the U.S. predominantly relocated in impoverished communities and many never regained the higher economic status they once had. Viet Nam War refugees held strong anti-communist feelings and they still persist today, due to their traumatic experience. These political ideologies were not transferred onto the newer generation because they were not exposed to the tragedies their parents experienced. While social consequences included the small communities and groups refugees were forced to reside in. This way, they felt more at “home” in America. Unfortunately, during the Viet Nam War, toxins and harmful chemicals were sprayed throughout Southeast Asia. These chemicals caused birth defects and diseases such as cancer. For example, the effects of Agent Orange still exist and harm Southeast individuals today because their parents were exposed to them.
5.     Southeast Asian Americans capture the history of the Viet Nam War era and its aftermath from alternative methods that were not portrayed by media in the United States. If more Americans were aware of the underlying history that was not exposed, they would have a better understanding of what America really is and how America poorly treats other countries and their respective residents.

Southeast Asian is crucial as a political impetus for the interdisciplines of US ethnic studies, especially as the US involvement in Viet Nam War “over there” resonated with those engaged in Third World liberation and other radical movements “back here.” Thus, the field of ASA studies formed coincident with the wars in Southeast Asia. However, the Southeast Asia refugees and immigrants entering the U.S. found that the “gift of freedom” required their cooperation with both existing and emergent disciplinary regimes, suggesting forms of violence other than war.

The essays approach these concerns by pointing to some important changes in the scholarship around Southeast Asians in the US. Firstly, there is a shift toward transnational cultural studies. This new body of scholarship addresses more complicated inquiries about assemblages of nations and states, refugees and residents, migrations and returns. New directions in Southeast Asian studies suggest we must rethink concepts, including citizenship and exile, dependency and freedom, economy and effects. Secondly, we are seeing changes in the approach to the Southeast Asian refugee. The authors target the familiar narrative mechanisms of the tragic refugee, which too often assume the good will of the US’ gift of freedom. Thirdly, these critical inquiries about war, empire, and their aftermaths occur in the context of renewed war, empire, and the unknown possibilities of their aftermaths.

The articles approach Southeast Asian American studies as a method for engagements with US empire. The authors pursue interdisciplinary and transdisciplinary methods. They represent a new generation of scholars (some of whom are migrants and refugees) who bring new frames of inquiry to the knowledge formation about these populations and their diasporas. While earlier scholarships often focused on damage of disruption, recovering “lost” or “unheard” voices, or refugee resilience to return selfhood to the Southeast Asian migrant, some authors seek to bear new pressures upon liberalism as well as neoliberalism. Ultimately, the essays offer new grounds for investigation in Asian, Asian American, and American studies.

Viet Thanh Nguyen. “Refugee Memories and Asian American Critique.” Positions.
In “Refugee Memories and Asian American Critique,” Viet Thanh Nguyen claims there are two nostalgic perspectives among refugees of the Viet Nam War. Svetlana Boym has used the term “restorative nostalgia” for the perspective of strong anti-communist sentiment. It is the feeling of not fully recovering from the traumatic history of the war, especially represented by those who continue to wear their military uniforms. They continue to live in the past, believing they can regain their homeland. The other perspective is “reflective nostalgia” that holds onto much of the uncertainty of the past. Although they stand at opposite ends, both nostalgics agree the Southeast Asians themselves were the ones most troubled by the war.

Mark Beeson, “U.S. Hegemony and Southeast Asia: The Impact of, and Limits to, U.S. Power and Influence.”

In the article “U.S Hegemony and Southeast Asia,” Mark Beeson argues that United State's foreign policies may be weakening its hegemonic role in the Southeast Asian countries. As stated, U.S. has been a very influential participant in foreign affairs, especially when it comes to financial affairs.

Since the end of the Cold War, the US has been pushing a globalization of democratic implementations. The U.S. has changed from the high institutionalized multilateral order associated with society to a more unilateral and reliant on military power than ideological power. Basically, U.S.'s hegemonic position is declining. Since the 9/11 attack, U.S. started to focus more on their military power to implement their superiority rather than allies or institutions like they were doing right after the Cold War. Although the Southeast Asians still show support in favor of U.S. military involvement in Asia, many are beginning to recognize that the policies influenced by U.S. may hinder their development.

Below discusses US’s agenda for pushing democracy as a hegemonic power.
https://www.youtube.com/watch?v=m5yj2DL1iN4 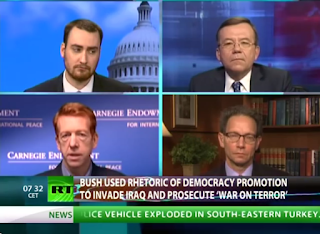 Beeson, Mark, “U.S. Hegemony and Southeast Asia: The Impact of, and Limits to, U.S. Power and Influence.”