1) How do you culturally identify yourself? From which country? Why?
2) Some countries today experience colonialism from Western countries, how do you suggest we change that? Or do you believe colonialism benefits some countries?
3) How do you distinguish between the colonizers and the colonized? With which group do you identify with? Keep in mind that one specific group can be colonized at a certain time in history yet become colonizers at another time.


4) What are the benefits (if any exist) and disadvantages to being colonized? Do you agree or disagree?
5.) How can history be trusted if it is just based on interpretations of someone else’s findings? How can we find the truth behind history and make it universal for the collective whole?
What does ancient history tell us about contemporary relationships between the Southeast Asian countries and the inhabitants in-country and in diaspora?
Ancient history tells us the contemporary relationships between Southeast Asian countries and the inhabitant’s in country and in diaspora is no history at all. Imperialism and colonialism have dominated Southeast Asian history for an incredibly long time and therefore displaced a way of life and allowed for diaspora. The relationships are falsely created due to the invasion of Western forces and history would have panned out a lot different otherwise. Westerns often needed to classify people and separate them based on any slightest difference, but prior to illegal occupation Southeast Asian countries existed harmoniously without accounting for even the smallest of differences. The contemporary relationships are a response to an ancient history written by the Westerners. If Western occupation had not occurred I believe we would have existed with a very different ancient history.

Chanda, Nayan. Brother Enemy: The War After the War.


In Sucheng Chan’s article, “Vietnam Before the Mid-nineteenth Century,” the author writes extensively about the history Viet Nam throughout Chinese, Portuguese, and French colonialism. The Chinese occupied Viet Nam for close to a thousand years and established a social hierarchy that is a combination of Taoism and Buddhism. However, Confucianism became a prominent way of life where rulers, elders, husbands, and sons, are the powerful classes of society. After uprisings by the early Viet Namese people and a civil war where Viet Nam was divided into two regions (by the Trinh and Nguyen ruling dynasties), in the late 1700s, Portuguese and then French missionaries arrived in Viet Nam. A French missionary named Alexandre de Rhodes implemented a new Romanized script for the Viet Namese language with diacritical markings, and that system of writing is still in use today.
In the 1800s, Gia Long was a Nguyen Dynasty king who traded with French colonizers but did not try to integrate Viet Nam into European culture and customs. Other kings of this last dynasty also were anti-Europeans since they encountered many uprisings from French colonizers and their supporters.
French Indochina was created when the French army set out to create an empire and to exact concessions from the region that includes Viet Nam today. They took Sai Gon and the areas around it by force, forcing the Viet Namese to sign treaties which allowed them to trade and spread their faith through missionaries. 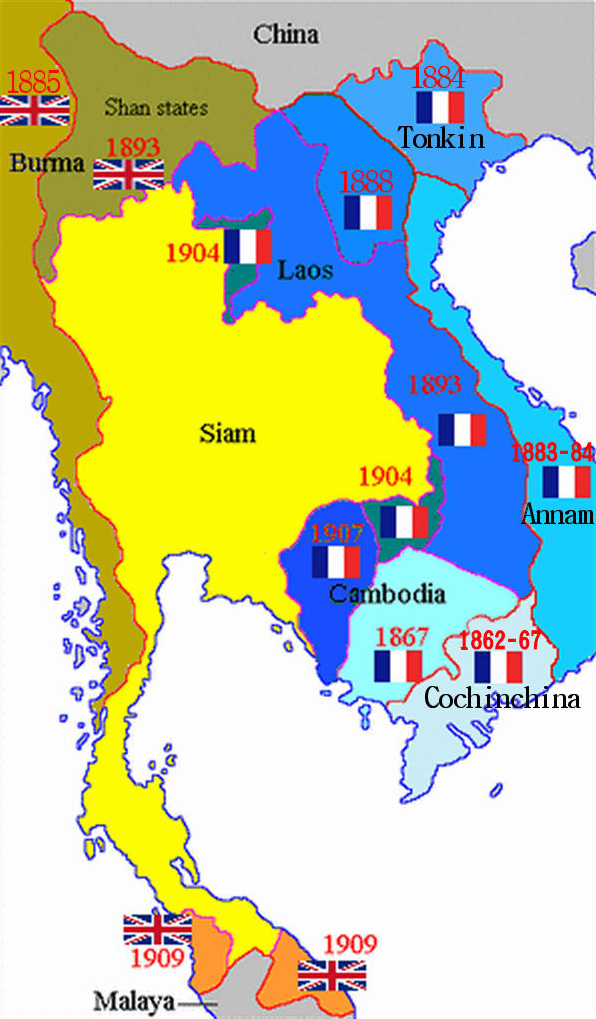 Map of the expansion of French Indochina


In the early 1900s, Ho Chi Minh introduced communism to Viet Nam. He had a strategy of first-nationalism-then-socialism, and this appealed to many young people in Viet Nam. During World War II, the Japanese occupied Viet Nam. However, there continued to be a struggle for the control of Viet Nam by Japanese as well as French colonizers. This ended with the 1954 Geneva conference where it was agreed that there would be a complete withdrawal of French troops and the country would be divided at the 17th parallel.


In Gary Yia Lee's article, he centers his argument on the Hmong and Miao historical and geographical origins. The historical and geographical origin of these people is a major concern as well as whether they are part of the Miao nationality in China and if they should accept being known under this generic name. Should “Hmong” or “Miao” be an umbrella term for this group of people? The Hmong were subject to Chinese control for many centuries and this long period of time allowed for a confusion and loss of identity. A rich and colorful history is clouded by lack of independence. Western imperialism also clouds the history of this ethnic group. The history of Hmong people is therefore written by Westerners and/or the Chinese, but hardly by the Hmong people themselves.  Through an insider versus outsider perspective, Lee observes and makes critical analysis of sources depicting of history of origins of the Hmong and Miao from sources of non-Hmong writers, in this sense, the outsider perspectives. In the six explanations looking at the mythical, biblical/Caucasian, genetic, linguistic, Middle-East/Siberian, and China origins, Lee interprets the findings of each explanation of how the Hmong and Miao people have originated and to where exactly have the Hmong and Miao descended from. At attempts to recover a history of the Hmong and Miao people and their origins and existence beyond the times of mankind, Lee’s interpretations of the explanations provides us readers a glimpse at whether history can be trusted or not and or as what Lee has stated in his article, “…if truth is a matter of interpretation and if we can only interpret history from the sources of information available to us, then what we choose for Hmong history today depends very much on what we want to get from the act of historical reconstruction" (1-25).


For the questions for this week, ancient history can be a part of one’s own identity. In Lee’s article, the diaspora of the Hmong into various locations such as the West, Thailand, China, Laos, and mainly in the Southeast Asia lands has broken apart the history of a collective ethnic group. Those at different locations across and in borders have fluidity intake a history that makes them feel more inferior thus being treated with better social standings around those they live with such as the Miao people in the highlands of China. For them, taking on the Miao name and the Chinese history was a way for them to feel like they were a part of history. History was thus viewed as a “tool” (1-25) as what Lee has stated that history became a way to be free from oppression and injustice. Ancient history can tell us many things in particular to one’s culture and traditions. It can be traced down from centuries ago and provide us with answers of unknown knowledge, or it can be history that we ourselves want to hear and interpret the way in which we want to understand it. There are so many things that are tied down with how history can be and is interpreted. Just like how in Lee’s article of finding the histological origins of the Hmong and Miao, the many sides and explanations of how the Hmong and Miao came to be relies much on the interpretation of the reader/writer. With this kind of history that is based on speculation, theories, and interpretation, it makes wonder whether or not history is real or false. Because through history, there is the understanding of one’s own cultural identity and ethnic group that structures the person inside of us. With the available history that is accessible, we take what we can get and make it the truth of what we believed our roots and origins came from. Thus, history is an aspect in itself that helps shapes many reasons why we have many diverse communities today.
Colonialism, no matter whom it is by, destroys people and a way of life. It divides people up politically and socially. It creates rifts between similar people and what was once family—is no longer. In current times, Hmong people in the West are no longer controlled by any foreigners nor are they subject to harsh political regimes; therefore, they have began to question their origins and identity.
Recent studies and research have led people to believe that the Hmong people have origins in China. Lee states in her article: “Which would the Hmong prefer, being known as Miao and having a long history stretching back to the antiquity of China with a large global population, or possessing only a sketchy history going back to the 19th century AD when they first converted to Christianity and became known as Hmong, with only 4.5 million members world-wide” (Lee 21)? The Hmong recognize the benefits and beauty of having a long and rich history, but they do not want to become a small and irrelevant part of China—they wish to exist as a separate entity.