In “Deporting Our Souls and Defending Our Immigrants” Bill Ong Hing addressed that “I wonder if some of the so-called criminality activity is a fabrication by our institutions just to get rid of the undesirable Asian once again.” After studying more about American history, I also end up wondering the same thing. Immigrant assimilation occurs as a result of war. To the U.S, immigrants with different cultures rushing to America might disrupt their peaceful, organized society. So by playing role as a “gatekeeping nation”, the U.S. use immigration laws to restrict and exclude “undesirable immigrants.” The laws have changed and become stricter and stricter over time. When an immigrant commits a crime, he or she will be considered as a threat, undesirable and should be disposable. They will be deported to their original country despite how long they’ve lived in the U.S. Deportation has hurt many family when a husband or wife being separated because of the crime they committed years ago. and what about their children who born in the U.S.? Who will take care of them? There is no second chance, no mercy. The U.S only takes the one that could give them benefits and they will kick out the undesirable one without reconsideration. At the end, it questions the ideal of assimilation. Is it simply just for economic and social gain purpose? 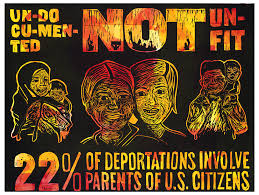