In "Vietnamese Diaspora Revisited" in Transnationalizing Viet Nam by Caroline Kieu-Linh Valverde, the author brings up a situation in which a Vietnamese student was brutalized by San Jose police. In this case, the Vietnamese American community mobilized in order to protest the brutality, but support immediately dispersed once they discovered that the student was a Vietnamese national. The lack of support was directly attributable to the political implications of being connected to a communist presence, indicative of sustained antagonism towards the Vietnamese state.

As such, Valverde's analyses reveal long-standing tensions and nuanced dimensions of the Vietnamese American experience that is rarely discussed. An especially interesting analysis is the ways in which anticommunism continues to be a pervasive force in the ways in which politics and culture production is regulated within the community. In many ways, I believe that anticommunism is the manifestation of sustained resentment towards the Fall of Sai Gon. In many ways, we can observe anticommunism as the direct reshaping of diaspora in order to replicate a lost nation. In recreating the nation, anticommunism plays a central role in the diasporic re-imagining of the homeland. In this way, will anticommunism continue to be a driving force in the politics and culture production of the Vietnamese community? 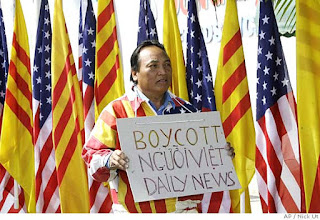