In George J. Veith’s work Black April: The Fall of South Vietnam, 1973-75, Vieth provides a highly detailed and analysis of the chronological events that would eventually lead to the fall of South Vietnam. The book is divided in two different volumes that tackles two different aspects of the war. The first volume covers the military aspect of South Vietnam’s defeat, and the second volume discusses the political and diplomatic efforts to implement the Paris Peace Accords. The analysis is coming from a militarized point of view, so the details are very vivid bringing everything to life. The book explains the strategic view from both sides on every battle, and really gives readers the insight on how South Vietnam was conquered in such a short time span during the last 2 years of the war when they were doing so well in the beginning of the war. Every decision made from each side led to another event, causing a domino effect which resulted in the way it is. The book explains in detail about how the events that led to each other.

Everything started with the signing of the Paris Peace Accords on 27 January 1973, which everyone hoped that it would forge a lasting peace within Indochina and end the Vietnam War, except for those in the North Vietnamese Politburo. The Paris Peace Accords was to create a ceasefire between the two sides and have the U.S end direct military contact. While the U.S. troops were to be withdrawn, the North Vietnamese troops remained in South Vietnam. This was something that created fear for the South Vietnamese but was non-negotiable to the South. Thieu (SVN president) denied the agreement but was threatened by Nixon by stopping military and economic aid. As an exchange Nixon promised to continue large-scale military and economic aid and to “react vigorously” to any ceasefire violation, which refers to the U.S. aircraft bombing the communist. During this time Nixon was preoccupied with the major pressure from the public opinion on withdrawing troops and the Watergate scandal. This action gave the North Vietnam the power because they were aware of America’s domestic problem and addition to that, Americans troop were longer allow to be involved directly while they remain the South. This gives them time to plan for the conquer of South Vietnam.

While the North Vietnamese Politburo (PAVN) finalized their strategic plan outline of the takeover of South Vietnam, Thieu is fixated on the economic problems in the South. With the Oil embargo and the Israel war, the U.S. aid is cut back tremendously which hurts the South and put major pressure for Thieu. PAVN took this opportunity to launch their offensive, ending the ceasefire from the Paris Peace Accords. The promises made by Nixon never pulled through and the aid kept getting deducted, putting Thieu into a bad predicament. The broken promises was the catalyst for the domino effect that would lead to cause the fall of South Vietnam. Thieu had put too much faith on the U.S., and when they didn’t pull through with the promises of “reacting vigorously” and the economic aid, he had tremendous pressure and made some bad decisions during his regime. Though bad decisions were made from both side, the decision made from Thieu had carry more weight.

What the author wanted to show the readers is that even though they were conquered in such a short time span, that doesn’t mean that they didn’t put up a good fight. Because of the cut back in the aid, they barely had any funding for weapons and ammunition so they had to preserve what they had. Yet they were able to put up a good fight, and even won some key battles. In the book, every battle is highly detailed, showing every actions, movement, and most importantly how hard both side fought. Eventually with the limited supplies, it had a huge effect within the battlefield causing major loses. It lowered the morale of the soldiers and caused what they would term “family syndrome”. Many ARVN soldiers began deserting the battlefield to find their families. Even with that happening the remaining soldiers still put up a good fight. Many people outside the war believe the South lose because they were weak were wrong, they fought valiantly.

My belief for the fall of South Vietnam is that Thieu had relied too much of U.S. support. He should have had plan B if everything was to not go to plan. From reading this read, I had a feeling that he made many wrong decisions that made a difference. For one example, when they lose control of the central highland and hue. Instead of placing troops around the area of Saigon, he sent the troops to many different locations which spreads the troops. This is because he didn’t want the people to panic, but it just let the enemies’ takeover South Vietnam more easily. Another reason is that there were many corrupt officials, and spies that provide the North information of the military plan which gave them the upper hand. There were many battles that the PAVN knew what they were going to do. Though whatever the reason, South Vietnam was still conquered by the communist. 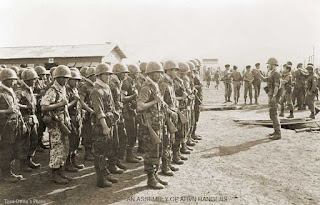 While reading Veith’s work it made me thought of hypothetical events such as what would happen if an event didn’t take place. What if the U.S. pulls through with the promises? What if North Vietnam Politburo never decided to resume war, how would Vietnam be like? The South Vietnamese Army did fought really well, I feel like many people till this day think that they were weak and wouldn’t have lasted if it wasn’t for the assistance of the U.S. military branches. Though this book shown military views of both sides, I felt like this book was created mainly to redeem the people of South Vietnam, showing had courageous they were in fighting for their country’s freedom. It was a great book but it can be very tedious for someone who isn’t into military strategies, because it’s explains the army every move during the battle and the turning points.