George Veith’s Black April: The Fall of South Vietnam 1973-75 details the political, economic, and military factors that influenced the fall of South Vietnam in 1975 to the Northern Vietnamese communists. Veith includes the lack of US aid for the South Vietnamese, the shortage of intelligence the South was able to collect about the North Vietnamese military action, and the shortcomings of the South Vietnamese leadership that prevented them from properly preparing for defense against the North Vietnamese. Contrary to popular media portrayals, the South was not just a “puppet government” of the US who was completely helpless to defend themselves. They had many brilliant generals whose tactical ability won them many victories against the North, even with minimal supplies and military intel. Veith aims here to redeem the collective opinion of ARVN soldiers as weak and cowardly. 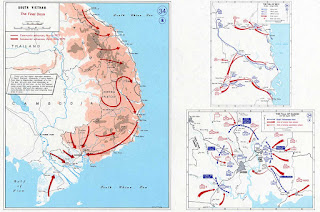 The Paris Peace Accords on January 27, 1973 marked the rapid decline of South Vietnam’s ability to resist the North. America’s withdrawal of troops and subsequent cuts in financial aid for the South eventually had catastrophic consequences. Although Nixon and Ford privately promised President Thieu more financial aid and military supplies, they were unable to persuade Congress to pass the bills that would fulfill those promises. While Congress made counter proposals of less aid, they were rejected. Without US aid, the South was unable to provide their troops with proper munitions and intelligence to fight back against the North. Additionally, Northern propaganda presented a smokescreen to the world of only seeking to economically rebuild, while secretly mapping out battle plans to conquer the South. This painted the South as the villain who sought only war, since President Thieu seemed to be constantly clamoring for more military supplies from the US.


Despite a lot of blame being laid on US shoulders, perhaps the most crippling setback South Vietnam faced was the general incompetence of its leader, President Thieu. As the battles raged between 1973, when North Vietnam began its active military campaign in the South, to 1975 when Saigon fell into Communist control, Thieu faced rapidly declining morale of troops and loss of faith from the people. His poor decisions set off a chain reaction that led to the fall of South Vietnam. He was unwilling to recognize that the anti-war mood in Congress would prevent much US aid from realistically coming. He also declined to withdraw into a smaller area of South Vietnam that would have been more reasonably defended by the resources he had readily available until the situation was imminently dire. When he finally agreed to cede territory to the North, his direct control over military action impeded his generals from effectively planning a course of plausible action. His tight control in battle plans were of great detriment to the fate of South Vietnam. In contrast, Defense Minister Vo Nguyen Giap of North Vietnam frequently deferred to his general’s opinions on military action to be taken, relying on their ability to make accurate field decisions.


With the loss of several major battles and the control of several key cities, many in South Vietnam began to panic. Its armies were scattered on too many battlefronts and without effective communication, chaos erupted. Despite the obvious decline of military morale, the South Vietnamese did not give up without a fight. In the battle for Phan Rang, a major blocking position for the Army of the Republic of Vietnam (ARVN), the ARVN regrouped and tried to devise a plan to slow down the advance of the People’s Army of Vietnam (PAVN). It seemed that the South would be able to hold the city, but the fear felt by the ARVN of the imminent takeover by the Communist North prompted them to make a costly mistake. The Airborne, ordered to destroy the bridges leading to the city, were unable to do so, which caused the PAVN to advance and take over not only Phan Rang, but also the Thanh Son airbase. After hearing new about Phan Rang and the airbase, Defense Minister Giap ordered the PAVN to attack Saigon as soon as possible. Miles outside Saigon, the battle for the city of Xuan Loc began. The South called one last time to the US for aid, but received no response. The loss at Xuan Loc proved to be the determining factor that would secure the victory of the North. President Thieu finally resigned, and General Duong Van Minh was appointed the new leader. Minh was appointed with the thought that the North would at least be willing to speak with him as a final attempt for a ceasefire. In the end, the North entered the Independence Palace, located at the heart of Saigon, and called for a surrender from the South. 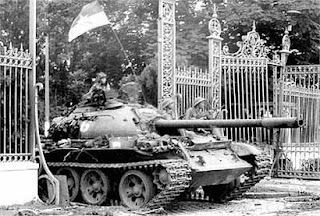 Veith’s research reveals that the fall of South Vietnam into the hands of the Communist North was not simply due to the weakness and cowardice of its soldiers, as is often presented. There were many factors that overwhelmed the ARVN troops and led to the success of the PAVN. Some factors were the lack of US aid after the 1973 Paris Peace Accords, the ineffective leadership of President Thieu, the strategically placed spies within the ARVN that supplied the North with invaluable military intel, and the negative effect on ARVN soldiers of fighting in battlefields where loved ones were at risk. It was the cumulation of these factors that led to the ultimate defeat of South Vietnam. Additionally, Vieth tends to lay a lot of blame on the lack of the US to provide aid to its supposed ally in the “war on Communism”. This last factor is perhaps presented out of proportion to its actual relevance in the outcome of the war. Veith seems to be apologizing on behalf of the US for its failure to adequately support its ally despite repeated promises of future aid.


In our opinion, however, too much blame was laid on the US. The mistakes made by President Thieu contributed most to the fall of South Vietnam. Even if Congress approved the proposed aid requested for South Vietnam, it might have only prolonged the inevitable outcome of the war. The poor decisions made by Thieu may have wasted such aid. Our point is that there were too many variables to be certain that US aid was the determining factor that doomed South Vietnam to lose the war. Nonetheless, this is only one interpretation based on the information provided in “Black April”. Veith said it best: “Unfortunately, history does not offer “do-overs,” only perspective” (499). As such, we can only wonder how different factors might have changed the outcome of the war.