Kill Anything That Moves

Kill Anything that Moves-Book Review
Nick Turse’s Kill Anything That Moves: The Real American War in Vietnam, brings to light the atrocities that were swept under the rug during the Vietnam War. The notorious My Lai massacre was only one of the few tragic incidents that happened to be made public. Turse’s intensive research for this book shows that it wasn’t one of the few, but one of the many atrocities during the war. It is a systemic problem, because of the methods into shaping a dehumanized military machine (soldiers). From the day they step into boot camp, they are forced to call Vietnamese only by the term gooks and brainwashed into seeing them as something not human but as animals. Whether they are fighting with them or not they are all they same, which are gooks.
The first systemic problem is the exploitation of the rules of engagement (ROE) that Turse brings up. These are rules that were made to reduce friendly fire incidents and most importantly to protect civilian lives. During the Vietnam War, the rules of engagement were violated numerous times that it would seem like it was normal and appropriate to everyone. Even the higher command would partake in this. When they see the civilians they can would just say they looked up or they were running, therefore they’re Viet Cong. And for example, if they there was sniper shot aim towards them, there would call an airstrike to destroy the nearest village, which caused many civilian casualties. For this reason, GIs would exploit this to kill innocent civilians whether it be for revenge or just because.
Another major problem was the body count system, which requires GIs to tally up enemies KIA. The objective of this was to see how they’re progressing in the war and predict the outcome.  As Turse points out the body count system just became something that the GIs can compare each other with. All that it matters was how many body counts do each person, regiment, battalion, and etc have. This is the main reason for the senseless murder of many Vietnamese civilians. Any Vietnamese civilian casualties would just be written down as an enemy killed in action to increase their body count. There is a famous saying within the GIs, “if they are vietnamese and dead, they are Viet Cong”. This system would be the reason for many high in command GIs to order “kill anything that moves”, in order to show their more effective/superior group.
I once took ASA 189B with professor Min and it was about the Vietnam War. But I’ve never learned anything about how innocent villagers were killed by American soldiers for fun and women and girls were raped and man slaughtered. Before I read this book, I always thought no innocent people got hurt during the Vietnam War. After I read this book, I learned so many dark secrets and all these horrible things these American soldiers did to these innocent villagers; especially in My Lai and Trieu Ai. I had no clue that during the war, American soldiers shot villagers for sport and raped women for fun. On top of all that, these innocent villagers never got justice. These soldiers that committed these war crimes were trialed but they never spent a single day in jail and got away with murders and manslaughters. I would recommend this book to everyone I know so that people can learn the real truth about Vietnam War. The title of this book is “Kill Anything that Moves.” At first I didn’t know what it meant but in the end, it means high rank officers giving orders to their soldiers to kill everything that moves which include all elderly, men, women, children, chickens, pigs and cows and burn their tents. They don’t care whose Viet Cong and who's not. They gave an order to kill all Vietnamese. Before I read this book, I had no clue American soldiers would do such a thing like this and I was shocked.
In the intro of the book, Charles McDuff had witnessed multiple cases of Vietnamese civilians being abused and killed by American soldiers and their allies. McDuff wrote a letter to President Nixon to discuss this. He reminded me of Paul Cox. Because Paul Cox also wanted to help Vietnamese civilians that got injured and killed during the war for no reason. McDuff is like Cox because many innocent Vietnamese civilians got killed during the war and they won’t tolerate it. Cox said it in our class about how he felt guilty spraying agent orange all over Vietnam. Cox showed us all the negative consequences this had on innocent civilians. Therefore, McDuff and Cox are trying to save these innocent Vietnamese civilians. Also McDuff begged Nixon in his letter to end American participation in the war.
On page 2, Captain Ernest Medina gave his men an order to kill children and women in the village. His exact words were “kill anything that moves.” GIs killed all the chickens, pigs, cows, old men sitting in their homes, a woman with a baby in her arms and the baby. The soldiers burned homes, raped young girls and women and poisoned their drinking water. I never once heard of this. I had no clue that American soldiers would hurt and kill innocent people. This is whole a lot worse than Cox’s presentation about Agent Orange. Agent Orange only caused severe birth defects and those people weren’t at least killed this way. This massacre took place in a small village called My Lai and this became known as “My Lai Massacre.” 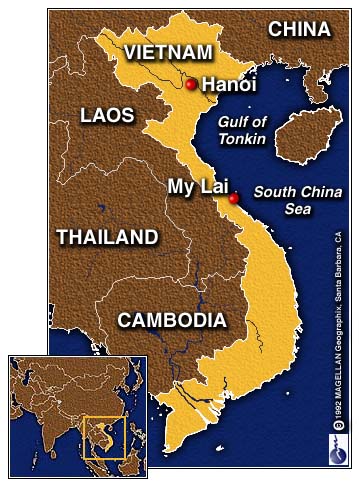 Map of My Lai 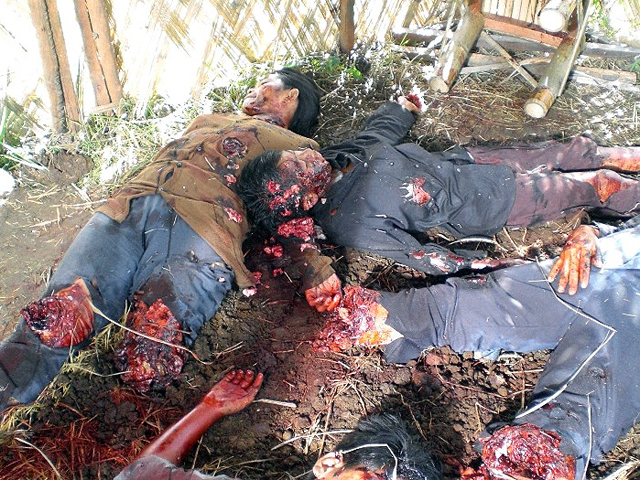 My Lai Massacre Picture
Addition to that, I want to know if American troops was never involved directly would the outcome of the war be different? The intention killing of civilians and even sometimes their own allies, South Vietnamese troop must have made them feel some kind of resentment toward American involvement. If anything, these actions would of gave regular civilians to have a reason to join the communist forces. The bombings and destroyed villages also caused a huge displacement of refugees which became a huge problem for the South. The U.S. troops was suppose to win the hearts of the people but instead made them feel resentment.
At the court, some soldiers used their commander’s order to shoot everything that moves. I think this is just a lame excuse. They shot every Vietnamese walking in the village for fun and they got away with it. When these commanders gave out this order, I want to know what they were thinking. Some soldiers claimed that the peasants lived in Viet Cong area and therefore, they’re Viet Cong but they’re not. The peasants lived in these areas because of the rice fields and their ancestor’s graves. Even when the bombs began to fall, they still cannot afford to leave.Generals told reporters that the best way to have these villagers come to the refugee camp is to blast the hell out of their village. Some generals claimed that they tried to get people out of the village before they start burning. All these refugees hated these camps. They complained that there’s no farmland, schools and it’s overcrowded and they miss their villages.
When all these bombing happened, there were photographers to capture all these images. Some children were burned alive by phosphorus and you can even see their bones. Also this book talked about how some soldiers raped women and young girls and killed them for fun. They threw a grenade into their homes, threw away their bodies to cover up their crimes. I never once heard of any of these things in my other ASA classes. Also on page 131, Turse talked about all these Americans that were involved in these massacres were found not guilty at the court and received only short jail terms. Some soldiers even cut off body parts of their victims in exchange for prizes offered by commanders or as souvenirs. My question is what is the point of all this? I thought American soldiers were supposed to help these villagers win the war.
On page 222, Turse talked about how all these war crimes evidence were covered up or kept secret at high command levels. In the newspaper or magazines they never published any of these things the American soldiers did to these innocent villagers. American military is ashamed of what they did and they got away with murders and manslaughters. I would highly recommend this book to anyone who thinks Americans helped Vietnamese during the war to learn the truth about what actually happened during the war.
Sources:
Turse, Nick. Kill Anything that Moves: The Real American War in Vietnam.
New York: Picador, 2013.
My Lai village map
http://www.edb.utexas.edu/faculty/salinas/students/student_sites/Fall2005/My_Lai/othermap.jpg
My Lai Massacre
http://www.amaquinadotempo.net/wp-content/uploads/2015/01/My-Lai-Massacre-1968..jpg
Posted by Unknown at 5:36 AM