Lecture last week was intense! The reality behind the mask of American society was exposed to its ugly core. It’s shocking to hear that our world is controlled by some sort of super powerful party like Mafia and we are nothing but a vulnerable human being who seeks for their protection. It was really absurd and difficult to buy that story at first since the lecturer kept on degrading a young generation for being whining, wasted and stupid to not to realize about anything happening right now. But as he went further on, the story started to make more sense and somehow I found myself attracted to it.

Talking about VN war, he showed us some documentaries and yes aha, I knew what to do for my research. I want to know more about VN veterans during war time and the untold story behind war- What did they do? How did they feel and cope with what they had been through? Etc…It sounds kinda broad but I hope I would be able to narrow my topic down to specific aspect as I start working on it. 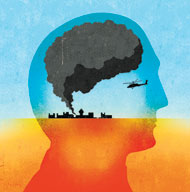