At the beginning of the article War, Genocide, and Justice, President Ronald Reagan is quoted saying, "Many of use are doing our best to see that Cambodia is not forgotten..."
Despite his claim, it pains me to say that I had no real knowledge of the genocide of Cambodia until I read this article. It was never taught to me in high school, and I am just now beginning to understand it during my senior year of college. I've learned through this article that 1.7 million Cambodians were murdered between 1975 and 1979 through forced labor and execution. That they were killed by the hundreds in the state-authorized prison of Tuol Sleng, and that the invasion of this death camp lead to the end of the Cambodian-Vietnames war, as well as the totalitarian regime that was the Democratic Kampuchea. It wasn't even until 1991, this tragedy wasn't even labeled a real genocide. I have not yet learned why I was never taught about this tragedy. Or why so many have happened, and the human race still hasn't learned from it's mistakes. It need But it gives me great hope that the Tuol Sleng Genocide Museum's mission is to be “a reminder not only of Cambodia's recent history, but of the inhumanity that sometimes overwhelms ordinary human beings.” 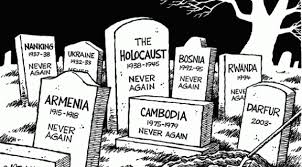