In "War, Genocide, and Justice", Cathy Schlund-Vials gives an account of the Khmer Rouge and its "Reign of Terror" on Cambodia during 1975. Motivated to eradicate any Western influence, the Khmer Rouge evacuated all Cambodian cities and forced people into countryside labor camps where they were tortured, exploited, and killed. In the three year period, the Khmer Rouge was responsible for the deaths of 1.7 Cambodians. This era of history and its effects are still present in modern society, nearly four decades after the Khmer Rouge reign.

Tuol Sleng Genocide Museum was created to commemorate the Khmer Rouge's incarceration, exploitation, and torture against the Cambodian people in the Tuol Sleng Prison which was originally a high school. The museum's purpose is to shed light on otherwise unspoken war crimes and human rights violations, as well as to bring evidence of a genocide against the Cambodian people. However, the Tuol Sleng Museum may have an alternative agenda as well. Although a relatively small percentage of prisoners were political prisoners, the Tuol Sleng Museum exclusively involves the accounts of these political prisoners. Rather than fully representing the entire situation of the Killign Field, the museum serves as an emblem and is not fully representative. Agenda aside, the museum serves a commemorative purpose for Cambodians who otherwise do not have many opportunities for such commemoration. 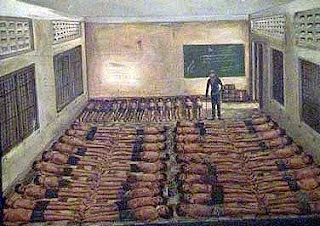