In this week’s reading War, Genocide, and Justice written by Catha J. Schlund-Vials is a reading that highlights how the Khmer Rouge an communist in ideology came into power in Cambodia, and basically destroyed everything or anyone that was against them.  Led by Pol Pot they seized control of Cambodia due to the weakness of the civil unrest not only did they commit kill many innocent people by genocide but also made millions of people to starvation.  In Chapter one Atrocity Tourism Politicized Remembrance and Reparative Memorialization” analyzes more concrete forms of Cambodian genocide remembrance, by way of constructed memorials. Schlund Vials notes that Cambodia’s Tuol Sleng Genocide Museum (that functioned as a prison where fewer than twenty of the twelve to fourteen thousand prisoners survived) and the Choeung Ek Center for Genocide Crimes (which is the site at which over a hundred mass graves were found, and from which the phrase “Killing Fields” is drawn) function as problematic memorial sites. Through a close reading of these repurposed places of torture and death, the author outlines such politicized sites of remembrance incapable of properly contributing to contemplative commemoration and reparative remembrance on account of their promulgating. One can’t stop to think when such crimes were occurring what was the international community doing why they didn’t intervene. Had they not learned anything from the history of world war II. Or did they think it was beneficial for them to intervene. Usually it is seen that the United States has acted as if it was the world police. The book further goes onto to talk about how a genocide museum was built in the same place where the horrific acts against humanity occurred. I believe many young people may learn a lot of visiting such a site as they may be able to reflect what happened their as such museum's aren't created to bring attraction but to show the world of what really happened their, and learn from history. to stop acts against humanity. 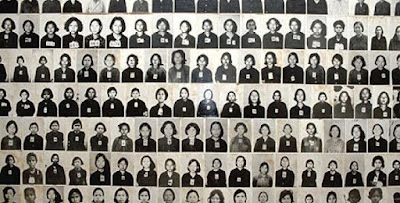