War, Genocide, and Justice: Cambodian Syndrome by Cathy J. Schlund-Vials engages the readers regarding the happenings of the Khmer Rouge. What occurred during that time was “grounded in untenable agricultural revolution and determined to eradicate Western influence by any means necessary, the Khmer Rouge regime systematically evacuated Cambodia’s cities and forcibly relocated residents to countryside labor camps” (1). However, what this reading is trying to do is to recognize that this event in history has been in conflict with memory and how the recollection of such a tragic time has been twisted by politicians and their agendas. Schlund-Vials does this by providing a series of example, such as by analyzing Sim’s speech when Vietnam liberated Cambodia from the Khmer Rouge rule. During the speech Sim fails to address the atrocities committed against the Cambodian people, but asked for them to move on and to see what had happened to them as a triumph. It was not only about how Cambodian officials saw the event, but how U.S. leader saw the war as well. In summary, the way that these leaders view the Khmer Rouge “contains politicized and selective processes of remembering the genocidal past,” and for one that is important in our Southeast Asian course is that it does not allow for healing and reconciliation for the individuals, families, and groups whom that this horrific event directly affected.


Question: Why did it take until 1991 for the United Nation to “refer to the period Democratic Kampuchea as one marked by genocidal policies” when the mass killing was so blatantly obvious? 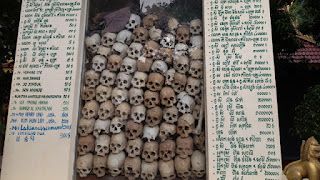