In Vietnam, there are 2.1 - 4.8 million victims of Agent Orange. Due to environmental damage, such as contaminated crops, animals, and water resources, as well as direct contact and exposure to the chemical. Effects of Agent Orange continue to appear even after the 3rd and 4th generation of children and it is unknown when the effects will cease.

There is overwhelming evidence against the claim that Agent Orange is a herbicide harmless to humans. The drastic increase in deformed births and cancers in direct correlation with the use of Agent Orange is no coincidence. Scorched Earth: Legacy of Chemical Warfare in Vietnam by Fred A. Wilcox claims that the U.S. State Department, Department of Defense, and Dow Chemical supported the use of herbicides and knowingly supplied and used Agent Orange, fully aware of it's carcinogenic and harmful properties (10). Some scientists and lawyers who were supported by chemical companies refuted the claim that AO is harmful, neglecting their moral obligation to science and their profession, misusing their credentials and, instead, driven by money. As a result, chemical companies, with the aid of the judicial system, have avoided compensating those who have been effected by Agent Orange.

We see this today where some scientists, politicians, lawyers, media, and educators refute the global warming crisis. Despite the cataclysmic consequences of denying the dangers of a planet humans are destroying, many are still driven/motivated by money rather than moral obligation.

In 2013, in Okinawa, Japan on former U.S. military land, 22 barrels were found with traces of Agent Orange. The Pentagon and Dow Chemical (who supplied the U.S. and Vietnam with AO during the Vietnam War) deny that such chemicals are on the island. "One barrel contained dioxin levels 840 percent above the safe standard and samples taken from water near the site showed levels 280 times higher than the legal limit. At least three barrels were labels with markings from Dow Chemical Co., one of the major manufacturers of Agent Orange. 'The Okinawa data, if accurate, are comparable to recent hot spot data collected in Vietnam'."

Q: Why hasn't the government learned anything from the Agent Orange health crisis? 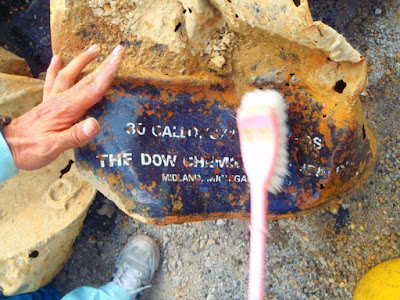 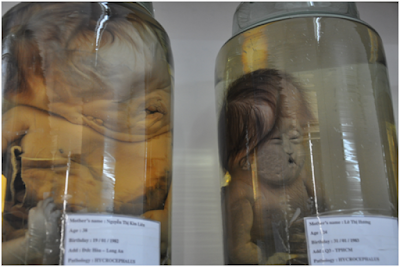 Common physical defects from children birthed from parents exposed to AO, which many professionals and the government claimed to be harmless to humans. Preserved deformed fetuses kept by Dr. Phuong in Tu Du Hospital.
[ Image Source: http://www.ppu.org.uk/war/environment/picts2/sons-of-a-man-poisoned-by-agent-orange.jpg ]