In War, Genocide, and Justice, Cathy Schlund-Vial discusses the Khmer Rouge and their brutal treatment of the Cambodian people. The Khmer Rouge ruled Cambodia from 1968 to 1999 and was led by a communist and agrarian doctrine. When the Khmer Rouge committed genocide against the people of Cambodia, they did not focus on any single racial origin. Instead: they cast the net much wider, and killed off anyone who did not agree wholeheartedly with the tyrannical government. This included anyone with ties to the previous Cambodian government, professionals and intellectuals, and ethnic minorities. When compared to past genocides the world had experienced, the crimes committed by the Khmer Rouge seem to, in a way, dwarf the preceding atrocities in their field of criteria. Never before had a ruler ordered the death of so many people purely based on their intelligence or profession. Often times, people were only killed for menial reasons as well, such as wearing glasses. Everything that did not fit into the “ideal image” of this new Cambodia that the Khmer Rouge envisioned, had to be erased, and this included the people. And while the number of people killed (a disputed 2 million) might be far less than those killed by either the Nazi regime or Josef Stalin, Cambodia’s size meant that these 2 million or so individuals made up roughly 20% of the country’s population. This is a truly staggering figure, and one unmatched by any previous genocide in the world’s history.
The Khmer Rouge truly encapsulated everything that could be wrong with an ideology. It was communism in its absolute worst form imaginable: a perversion of even the extreme perversions of Stalin and Mao, one that treated humans as animals, and intellect as evil. It is interesting that this conversation comes after those had about the war in Vietnam. Often times, it is easy for the people of today’s generations to demonize the United States for its actions in Southeast Asia and elsewhere in the fight against communism. The American government is criticized for meddling and interfering and it is common for individuals to remark that the United States should have ignored the spread of communism instead of starting wars over its implementation. However, it is crucial for one to remember the reason why the United States fought communism to the degree that it did. And potential economic and self-serving reasons aside, the American fight against communism was against genocide, tyranny, and murder. The American fight was against governments like North Vietnam, the Khmer Rouge, Maoist China, and the Soviet Union who were determined to slaughter their way to a twisted, demented, “utopia”. The American fight against communism was as noble as the Allies’ fight against the Third Reich. And while atrocities were committed by U.S. forces in many instances of this fight, the alternative reality that non-involvement would have insured would be more horrifying than any party in modern politics is willing to admit. The Khmer Rouge should stand as an everlasting reminder of the incredible evil possible at the hands of mankind. But at the same time, the stories of heroes that arose amid this death should also be preserved: as proof of the existence of true humanity.


Question: Should the United States have intervened to stop the Khmer Rouge from killing millions? 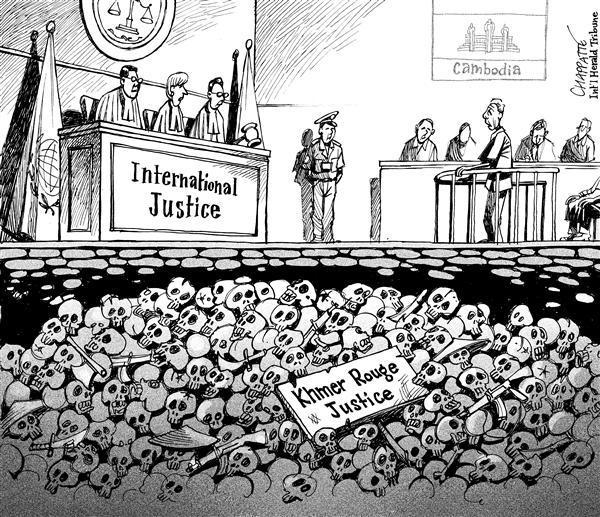