In Cathy J. Schlund-Vials’ book War, Genocide, and Justice: Cambodian American Memory Work, she discusses the Khmer Rouge and how their actions led to the Cambodian genocide, that so few people discuss. With the introduction, including Reagan's letter made me feel very uncomfortable because it seemed like he was detached from the whole situation. In times of injustice and genocides are existing in other parts of the world, the U.S. does not seem to do enough in offering aid, yet they are so quick to enter in other nations' affairs when they want to gain land, resources, or win a war. Although it is good that some Cambodians have found solace in America, there are other matters that have not been discussed, and their history needs to be included when discussing Southeast Asian history and genocides. If we do not discuss it, how will we be sure that it won't happen again? When the Khmer Rouge enacted all these awful massacres against the Cambodians, it seemed like the U.S. stayed silent on the matter, and all of these Cambodians suffer from PTSD and trauma, now called the Cambodia Syndrome. It is unfortunate to see a repeat of events, when Vietnam Syndrome was so real for many and now Cambodians must endure trauma from war as well.


Question: Why have we not been taught Cambodia Syndrome, but have been taught Vietnam Syndrome in the past? 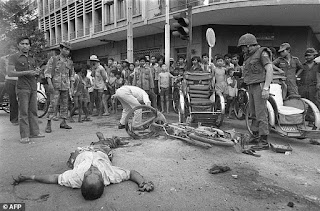