In chapter five of Transnationalizing Viet Nam: Community, Culture, and Politics in the Diaspora (Asian American History & Culture by Kieu-Linh Caroline Valverde, navigating a cultural identity in politics is discussed. It follows the path of Madison Nguyen a Vietnamese American who was advocating a name to honor the Vietnamese community in a section of San Jose. However, some of those who favored another name for the district thought she was inconsiderate of the history of those who had fled the communist by not going along with what they chose. Since they felt that she was wrong in her decision, there were many protests, even among her own former supporters in the community that fought against her as a political figure and an individual. She was labeled as a communist although there was no proof. She was told that she did not represent the community although they continued to elect her even after the opposition of the name. She struggled so hard for a name that she thought would best represent all the groups that lived in the community rather than those labeled the opposition as communist. Eventually the name she chose did prevail for a bit. This shows how much an impact a name can be with historical context. As the reading stated, “True community then forms when people respect and listen to each other’s needs, showing compassion for and understanding of fellow members of the community” (1868). Madison Nguyen did try to follow community wishes from the majority rather than a vocal group that was willing to label her a communist.

This issue is prevalent today because there are still many names of older buildings which still can potentially cause controversy even today long after they have passed away. Boalt Hall at University of California Berkeley recently received media attention because many felt this law department building deserved a better name than one that honored a man who was an instrumental part in pushing for the Chinese exclusion act. Recently UC Berkeley did change the name after strong opposition was posed. UC Berkeley is not the only university with this issue however. For me as a communication major, many of my major classes and advising are conducted in Kerr Hall located close to the Memorial Union. Clark Kerr who's name is on the building, was influential in the Master plan for education which was intended to segregate college education. He planned to segregate colleges by race and socioeconomic status. With all these names, it is important to consider the communities impacted by individuals Boalt and Kerr in relation to prominent buildings that would later carry their names.

My images are of Kerr Hall and Boalt Hall

My question is, how can we carefully approach historical areas of significance when looking at the names attached to them? 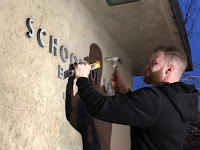