In her book Transnationalizing Vietnam, Kieu-Linh Caroline Valverde emphasizes the importance of transnationalism and the role of globalization in spreading awareness and redefining the perspectives of the people-- they now have the opportunity to re-narrate the stories that directly impact their surrounding communities. People have different attitudes pertaining to Viet Nam, whether they are Vietnamese American and those living in the country itself. Regardless, it’s a complex relationship that resulted in the diaspora of many, leaving a good portion at a loss when it comes to their identities. As a Vietnamese American, born in the US, the war itself didn’t directly affect me, but I’ve experienced trickle-down effects even as a third generation-- three decades after the Vietnam War. I wasn’t part of my parents’ story or my grandparents’ and so, it felt wrong to assume their narratives because I wasn’t a victim or a refugee. And yet, I felt I would be doing a disservice to my culture and heritage if I didn’t feel angry or devastated for my country.

These different perspectives are discussed in Chapter Four with Chau Huynh’s artwork. In an effort to commemorate her mother’s memories and experience, she created an art piece that faced great opposition. Because it was associated closely with Communist ideals, opponents attacked her artwork, falsely presenting it to the media as Communist propaganda and destroying her original intentions with the piece.

Question: How do we approach vocalizing our opinions and views when topics such as this are widely contested? 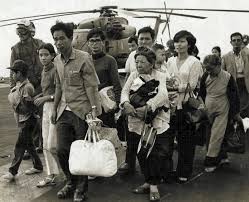