The Vietnamese War displaced hundreds of thousands of Southeast Asians living in diaspora in the United States. Valverde (2012) exposes the complexity of Vietnamese immigrants living in the United States and points out how their acts via the virtual/social community environment can be damaging and even divide the community. It is disheartening to read about Madison Nguyen’s political troubles over the naming of a business district. The outpouring support Nguyen once received during her political campaign later became her worst enemy in trying to oust her from office.

Stories and perspectives shared that not all people were against Nguyen, however they rallied against her anyways since their peers adopted the belief that Nguyen was a communist and needed to be stripped of her title. The mob mentality was so strong that despite people’s beliefs, they banded together and made a uniform decision and behaved upon it. Do you think that mob mentality can be used for good? Nguyen’s situation was over naming a business district. If this issue was so profound that people will rally and even try to recall Nguyen, do you think we can use that same mentality to fight for what’s right? Such as, young children displaced and living in cages?

Do you think that the general population can make their voices heard and fight for displaced children? I know that this has nothing to do with SEA/Vietnam War, but I am compelled to believe that one’s beliefs are strong enough they will make their voices heard. Do you think we can make our voices heard like those of the protestors against Nguyen? Of course, it was and is and will never be easy for Nguyen, as she mentions how heart breaking it is. But what if the community banded together to fight for something good. OR do you think that people just simply don’t care and that is why we allow the government to get away with this heinous crime? When will we stop letting the government getting away with crimes such as those that occurred in Vietnam War? Treatment of refugees and Trumps executive order to deport SEA communities? 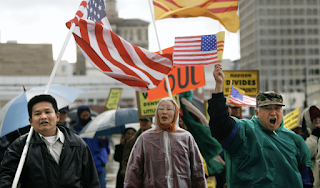 Image: https://www.mercurynews.com/2008/01/09/an-ultimatum-for-madison-nguyen/
I cannot imagine how Madison Nguyen must have felt having hundreds of people yelling and throwing things at her telling her to resign. Can you?