In Professor Valverde's book, she examines the cultural and political identity of Madison Nguyen. There are often tensions and complicated relationships with the Vietnamaese diaspora and the homeland. These factors were present in the case of San Jose former Vice-Mayor Madison Nguyen. Nguyen’s support from the Vietnamese American in San Jose suffered a sharp reversal due to the controversy over whether an area of a large percentage of Vietnamese retailers should be named as “Little Saigon” or “Saigon Business District”. Nguyen suggested the name “Saigon Business District” after she heard from different groups in her council district who wanted the word “New” to be included in the name, indicating a new life in America after they left their homeland. Supports of renaming the district “Little Saigon” denounced Nguyen as a traitor to the community because she did not support what they deemed as the “majority” of the Vietnamese community supported. Professor Valverde presented this as a perfect example of the journey of a politician and the cultural-political agenda.


If Madison Nguyen had a second chance, do you think she will rename the district to what the majority supported? 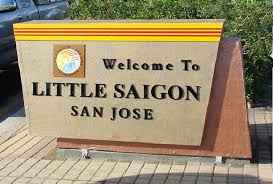