Harrison Manacsa
Prof. Valverde
ASA150E
28 Jan 2017
Radicals on the Road exemplified, among other issues, that many Vietnamese narratives of the War are similar to those of issues historically facing other ethnic groups globally. Betita Martinez found that “. . . the vast majority of Vietnamese people were peasants, a status similar to the agricultural background of many Chicano/as of New Mexico.” (Wu 215) Additionally, Martinez self-identified with the Vietnamese women because of their unsung heroism for political representation. Because of her mixed racial background, as well as her black identity, Martinez found it difficult to progress her career and opportunities during the Pre-Civil Rights movements. Likewise, Vietnamese women believed that their opinions were not being considered in plights to end the war. One Buddhist nun said that “. . . if the women in the U.S. knew what was really happening with her country, they would make it stop.” These commonalities fostered sympathy, which helped to bring light to the travesties of the War toward women and their families. (Wu 209) For this reason, numerous female empowerment organizations, such as the Vietnamese Women’s Union (VMU) and events like the Indochinese Women’s Conference (IWC), were formed to bring attention to the forgotten issues women face(d). In the process, women from seemingly distant nations sympathized with one another and converged toward a similar stance. In fact, the most effective movements specifically emphasized the female gender—omitting race, socioeconomic status, and culture. American women became unprecedentedly leveled with international women through this alignment because white women “drowned” in a sea of dark- and mixed-skin women. At the same time, their message transcended the male-dominated sphere of media, as well as the potentiality for lesbianism topics to be introduced. In other words, the historical impact of women were fortified further through the international joining of women.
This is why the recent women’s march was successful. Even under the guise of President Donald Trump’s campaign revelations about women, the planned marches in the United States did not heavily respond nor entertain those issues. The local U.S. march was overshadowed by the international cities having similar marches for women—not directly in response to Donald Trump. I might argue that the international participation of the march was ignited by the U.S. issues conflicting women in the same way that women responded to the stories of violence and familial separation from Vietnamese women during the War’s height. Basically, history repeats itself. 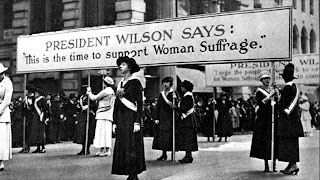 Women have historically come together to achieve great strides
Question: Wu did a good job of relieving her work of as much male testimonies and narratives. How might this have changed the female heroism evoked in the work if males were revealed to have assisted their movements?
Image: https://i.ytimg.com/vi/uWQKYmg_0R0/maxresdefault.jpg
Citations:
Smith-Park, Laura. "Protesters rally worldwide in solidarity with Washington march." CNN. Cable News Network, n.d. Web. 27 Jan. 2017.


Wu, Judy Tzu-Chun. Radicals on the Road: Internationalism, Orientalism, and Feminism during the Vietnam Era. Ithaca: Cornell UP, 2013.
Posted by Unknown at 12:30 AM