Upon reading a few excerpts from “Kill Anything that Moves,” it was utterly shocking to hear about the hidden stories that were never told openly about the massacre that took place during the Vietnam War. Two factors that is important in understanding why and how this tragic event occurred the way that it did could be explained through the concept of preemptive wars and body counts. Touching on the concept of preemptive wars, while the US’s motive in sending its soldiers to My Lai was to prevent the Viet Cong guerillas, instead, the country killed many innocent lives. There were no Viet Cong presence and the security dilemma the country had, led to a mass murder that heavily affected the Vietnamese people. The preemptive strike that took place kept going on until a US army pilot halted the massacre which is quite disturbing because if there hadn’t been an intervention, many more Vietnamese people would have been killed. In relation to more recent events, the strike made by the US on Vietnam is similar to a particular explanation for the 2003 Iraq War. It was claimed by the Bush Administration that the war on Iraq was that of a preemptive war due to the fear of the development of WMDs (weapons of mass destruction) present in that country. In both the My Lai Massacre and the 2003 Iraq War, preemptive war explains for why the US took action and how conflict arose in those countries.

Additionally, during the time period of the My Lai massacre, the American military heavily thought of war as a “quantitatively oriented system” which emphasizes on the the idea of “body counts” (Turse, 43). Counting the number of atrocities offered quantitative data of which was thought to demonstrate progress and measure success. Perhaps this belief could be used to explain for why the killing went on for the duration and extent that it did. However, it is important to recognize that while “body counts” statistically can prove how strong a military is, it does not account for other capabilities such as a strong sense of nationalism and willpower. Even though the American military appeared more strong when examining its quantitative data on the numbers of atrocities, it did not have strong willpower like the Vietnamese military (Turse, 7). This difference between the two countries’ military’s mindsets really shapes the outcomes that follow thereafter. It further explains for why Vietnam won the Vietnam War and why the powerful American military did not bring the US to victory. This can be explained by the theory of the paradox of power and conflict outcomes derived by Maoz, which argues that the strength of a military can be measured in different ways and it is only if we understand the different ways will we understand the result of something.

As seen in the aftermath of events like the My Lai Massacre, the lack of transparency of what occurred in history is problematic to the the SEA community because there are many events similar to this particular incident that were forgotten about and under-acknowledged. It is important to shine light onto the realities of the tensions and conflicts between countries to raise awareness about the truths.

Question: Despite the mistakes that countries make when dealing with foreign diplomatic matters, why do they continue to repeat the same tactics and strategies if they were not successful in addressing an issue from before? In times of security dilemmas between a country and another, would a country be able to seek out a better solution rather than resulting to preemptive wars? 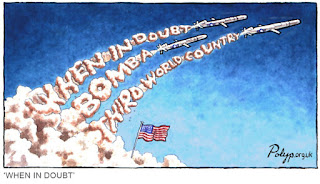 
Turse, Nick. Kill Anything that Moves: The Real American War in Vietnam. Henry Holt and Company. New York: ​2013. 19 January 2017.
Picture: http://www.indymedia.ie/attachments/aug2009/polyp_cartoon_pre_emptive_strike.jpg
Posted by Unknown at 1:56 AM