In Kill Anything that Moves: The Real American War in Vietnam, author Nick Turse paints a sobering reality of the atrocities committed by American forces during the Vietnam War. It is a more nuanced analysis than what the public is used to hearing, however. The book delves into many of the causes behind the atrocities, and dissects the reasons why the widespread devastation is not common knowledge. The text cites, among other things, juvenile officers, kill quotas, war-fatigue, racism, and propaganda as the main driving factors behind the steep numbers of civilian deaths. To justify this behavior, martial-law, unnatural rules, and baseless borders are established: all methods of keeping the bloodshed on the “right side” of the law. The book also cites the infamy of one such massacre, the My Lai incident, as overshadowing all other reports of abuse; and by becoming the “poster-child” of American atrocities, it led to the incorrect assumption that the reason for its infamy was the absence of any similar incidents.
The events described in Kill Anything that Moves had, and continue to have, a massive impact on the South East Asian community, at home, and abroad. For one, the atrocities shattered many Vietnamese families, causing countless men, women, and children to be diminished to only memories. Those that survived, or saw the onslaught approaching, fled to distant lands, namely: the Philippines and the United States. In the United States, these refugees formed tightly-knit communities that gave rise to the formidable numbers of current-day Vietnamese Americans. While the atrocities were not the only reason for their immigration, as the war itself would have prompted many evacuations on its own, the atrocities certainly only did more to make Vietnam more inhospitable, making America a more alluring destination.
Interesting parallels and anti-parallels are created when one relates the atrocities committed by U.S. troops in the Vietnam War to those committed by U.S. troops in the more-recent conflicts in the Middle East. Unfortunately, there have been reports of atrocities similar to those described in Kill Anything that Moves happening again to citizens caught in the wars in Iraq and Afghanistan. Drone strikes, Blackwater mercenaries, waterboarding, and the Haditha massacre are just a few examples of the allegations of atrocities carried-out by U.S. troops. And while techniques are in place to minimize “collateral damage”, over 100,000 Iraqi civilians were ultimately killed in the 8 year-long war.
However, it must also be mentioned that while this “collateral damage” certainly existed, much of it was due to suicidal techniques enacted by insurgent forces aiming to enrage and dismantle society, not the United States military. When one compares the Vietnam War to the Iraq War, then, there is a stark difference in the attitude of American soldiers towards the local population. While aforementioned atrocities did still occur in the modern conflict, they were far fewer and further between than those committed in the Vietnam War. Several changes to conduct may have been variables in this contrast: kill counting was widely abolished and no longer displayed prominently, commanders were incentivized to strategize and win objectives rather than kill enemy forces, less propaganda was featured to demonize the enemy, and troops’ morale and basic needs were more stringently tended-to. While this cannot be considered a full-victory, it is certainly a step in the right direction and further progress must be accentuated and rewarded by military brass.
There is, however, a more cynical approach to analyzing this drop in atrocity rates in the modern-age. Namely, in this age of the internet and wide-reaching media-coverage, it is far more difficult for the military to hide incidents when they occur. Civilians communicate with mobile devices and war correspondents and watchdog groups analyze every facet of military field reports. In the age where almost every pocket is armed with a smartphone, military accountability is commonly audited. Which begs the ominous question: are atrocities by modern U.S. forces rarer because of a positive change in military conduct, or do soldiers simply “behave themselves” out of the reality of surveillance? 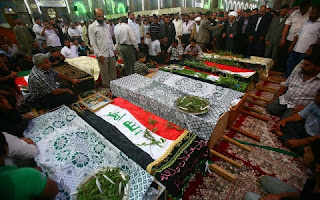 Iraqis mourn over the coffins of slain Shiite pilgrims during a funeral in Karbala in 2011.
Mohammed Sawaf/AFP/Getty Images
Posted by Unknown at 1:49 AM