From reading this week’s reading “Kill Anything That Moves” by just reading the title you already get a sense of what this reading is going to about. It’s going to be about warfare, killing of people & violence. In this reading it talks about the My Lai Massacre, which occurred in March 1968 were civilian people who were unarmed were massacred in South Vietnam. Although I wasn’t even born at that time nor do I very much knowledge of the Vietnam conflict, but I do have an understanding when armed forces kill innocent people. As my parents, have told me that in Kashmir which is a disputed region of Pakistan & India. There have been many killing of the local innocent people of the region by the Indian armed forces. Although in a crowd few people know the details or extent something is occurring, people just tend to go with the flow. As there is usually a leading officer or certain individual in charge of a group who can motivate the masses of people to do as they say, and those individuals following the directions of their leader don’t realize or think for themselves if the orders giving a morally correct or not.  I can apply this scenario when a person is a war most people are so stressed out that they are unable to think logically of what is right or wrong and just go with the flow. If for instances someone orders them to shoot anyone they see regardless if they are enemy or just a by-stander innocent civilian, they will just follow the orders of their superior officers. In the My Lai Massacre the U.S. Armed forces were responsible for killing innocent Vietnamese people. The horrific part above all this was that they try to cover up the killings, after an initial inquiry only a few selected officers were held accountable and tried for this crime. William Calley a lieutenant was found guilty for this massacre. He was given a life sentence in prison, but later released after 3 years by President Richard Nixon. Similarly, in recent times there has been conflict in Syria. Although officially the United States isn’t at war with Syria and hasn’t sent troops into that country, but they are constantly bombing that country in which innocent people have died or have gotten injured due to the bombing. Yet no one is going to punish those people for the bombing in which innocent people have lost their lives. But rather an statement will be issued by the government and be forgotten about within a matter of weeks. Recently last July 2016 a report posted in the Guardian stated that U.S. led airstrikes killed over 73 innocent Syrian people which included many children. The Syrian government isn’t in the capacity to challenge the U.S. for these killings nor is the U.S. government going to prosecute the pilots of the planes. At the most the U.S. will help with giving more aid to the war-torn families or provide shelter to people fleeing Syria. 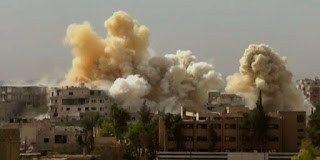