In the US, the boundaries of East and West are typically situated as a dichotomy. The West includes aspects of masculinity, modernity and science, while the East refers to femininity, fanaticism and tradition-bound norms. In this relationship, the East is clearly considered to be inferior to the West. The US usually upholds this notion of inferior Asia, up until it begins to work against the US's interests. In the aftermath of World War 2, the US wanted to distance itself from being an imperialist dominator after devastating, large-scale issues of European imperialism, especially in the early Cold War era. Mass media played a significant role in attempting to bridge the East-West divides in an attempt to garner support for the US's role in the Cold War and legitimize its stated mission of democracy.

Political activists questioned this so-called pursuit/fight for democracy and looked to identify with Asian people instead. This refers to "radial orientalism", as these people romanticized and idealized the East and those fighting against imperialist states. This still includes a hierarchical aspect to the relationship, since the West was more advanced technologically and democratically. Underlying their earnest intentions is the belief that the US is the one to save the poor East.

This dichotomy is still present today, as shown through the model minority myth. The concept that Asians as a minority group are innately successful seems to be a compliment on its face, but is actually isolating and dehumanizing. It attributes one's success to simply one's race. It discredits the struggles that Asians overcome to achieve success in the face of relentless discrimination and racism in American society. Not only that, but the model minority is also used to discipline other minority groups and trivialize their struggles. US society praises the Asian for economic success when it is easy; but when Asian Americans speak up and demand political and societal equality, the model minority is reprimanded and ignored.

Question:
What are other situations in which the US government (or society) has changed from degrading Asians to praising/empathizing with them when it works in the US's favor? 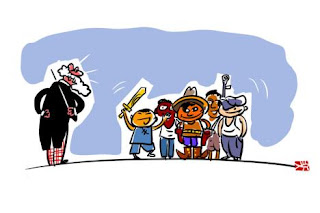