Kill Anything That Moves: The Real American War in Vietnam by Nick Turse opened my eyes to the reality of the Vietnam War. As a Vietnamese American who only learned about the war through a Eurocentric lens, I believed that America was our savior. In the few stanzas of learning about the war in AP US History textbooks, I was completely detached from the entire event. This reading allowed me to see both sides of the story: the devastation faced by millions of Vietnamese people and the trauma that hundreds of thousands of veterans had to face. PTSD is not discussed enough within SEA American families, even though I know that it is a reality for many, like my grandfather who fought in the war. Night terrors still haunt him, even though the war was decades ago. The war still lives in his mind and soul, and even if it is over for the rest of us, it is not over for the people who fought. The dehumanization of bodies during this war made me think of the crisis that America faces every time our country engages in war. Deaths are mere body counts, and they are just numbers that we have become desensitized to at this point.
I remember barely hearing about the My Lai Massacre. The introduction to this reading gave me chills as I read about the mass killings, rapes, and mutilations of unarmed civilians in my home country. Being born in America, I suddenly feel so sheltered when it comes to my own history. It made me question if my family knew the reality of the situation, and if they did, how could they praise the United States as their savior? I felt like the title was so fitting for this chapter because it captured how atrocious this war endeavor was. The fact that the My Lai Massacre was indeed an operation, not something that deviates from the norm. What made it even worse was that the situation was not rare nor was it uncommon. There were hundreds of other My Lai massacres that went unnoticed because of poor coverage, as well as the media and the government’s deliberate decisions to make it seem like the incidents were isolated. These detailed accounts and statistics allowed me to fully empathize with my Vietnamese people, all the while understanding the trauma that several veterans had to face even when it was not their own personal fault.


Question: How can we tell these narratives to open people’s eyes about the truth of the Vietnam War without re-opening wounds that so many have fought to close? 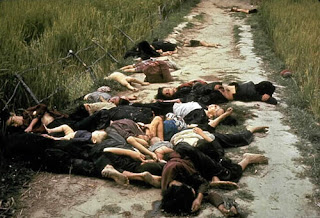 The My Lai Massacre. N.d. PBS. Web. 21 Jan. 2017. <http://www.pbs.org/wgbh/americanexperience/features/photo-gallery/mylai-massacre-evidence/>.
Posted by Unknown at 2:24 AM