Blog 1: Week 3 - Kill Anything That Moves

Nick Turse’s book Kill Anything That Moves: The Real American War in Vietnam narrates the actual reality of the Viet Nam War, one that was hidden from the rest of the world. The My Lai Massacre was an example of that unknown reality, in which the U.S. army were instructed to, “kill everything that breathed,” (Turse 2). The event resulted in more than 500 deaths of innocent and unarmed old-aged civilians, women, and children. What remains to be the most shocking revelation is that the story was kept secret for more than a year, and the massacre was even deemed as an American “victory”. This week’s theme is “Liberal Academic Perspective,” therefore it is crucial to critique and analyze the history that has been presented to us through a different set of lens. Southeast Asians or Vietnamese immigrants/refugees, my family included, have often been told to be grateful that the United States allowed for us to have residence in their country. It has given the U.S. the opportunity to present the outcome of the Viet Nam War as a “noble cause,” however with body count as the measure of success in wartime efforts, one must wonder what was considered to be noble if success was at the expense of 7.3 million Vietnamese civilian casualties overall (Turse 13). With this perspective, it allows for a possible scenario that the U.S could have been the problem rather than the solution during this time in history.

In connection to more recent news with the crisis in Syria, the whole situation seems to be reminiscent of the one that occurred in Viet Nam. Airstrikes have been sent into region with the intention of fighting ‘against terrorist groups,’ however during the process it involves the mass killing of innocent civilians and their homes have been turned into a battleground. Similar to the Viet Nam War, the happenings in Syria have been broadcasted in graphic detail due to the rise of social media. One image in particular that has stuck with people around the world is the one of a boy “sitting dazed and bloodied in the back of an ambulance after surviving a regime airstrike” (Hunt). Regurgitating what Mr. Duc stated regarding images powerful ability to reach the moral consciousness of people, because following the release of this unsettling photograph more interest has been shown concerning the war in Syria. However, what remains to be even more unsettling is that history is repeating itself once again.

Question: By comparison, the handling of the VN War and the crisis in Syria are presented to be very similar. It has been over 40 years since the end of the VN War, but why are the same mistakes being made again? Also, why have the negative sentiments towards refugees not change? 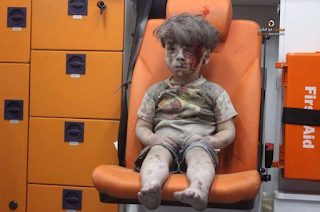