The book Radicals on the Road: Internationalism, Orientalism, and Feminism During the Vietnam Era by Judy Tzu-Chun Wu presents several ideas worthy of discussion and pertinent to current events. Wu opens her work by briefly detailing the perilous journey of travelling to Vietnam during the height of war between the United States and Vietnam. Among the few that dared travel to Vietnam during such an unstable time were American women activists. According to Wu, “American women . . . travelled internationally and engaged in political dialogue, particularly with their female counterparts in decolonizing Asian countries” (6). In regards to our theme of the week: Third World Alliances and Social-Political Movements, American women and Third World women formed alliances through “a language of sisterhood and motherhood to establish a common connection” (Wu 200). The Women’s Strike for Peace (WSP) slogan was, “Not Our Sons, Not Their Sons”, clearly exhibiting that motherhood transcends any racial divide (Wu 204). “Together, these women attempted to create an international peace movement based on a global sense of sisterhood” (Wu 6). “These women proclaimed their right to condemn their threat of global and nuclear warfare based on the desire to protect their own and other people’s families” (196). Question: What political groups would be opposed to WSP's mission? 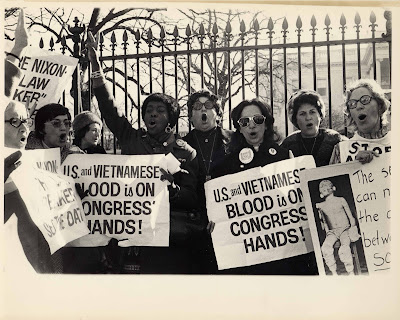 Recently, millions turned out for the Women’s March that was active in all 50 states, as well as in countries outside the US. The purpose of the march was to call on reform for gender equity, as well as economic and racial inequality, calling for rights to affordable reproductive healthcare, immigration rights, as well LGBTQIA rights. These threats to our rights directly impact everyone, regardless of race, including the SEA community. Where once these rights seemed attainable under President Obama, many feel that their rights are threatened under President Trump. The Women’s March made headlines and newsstands everywhere. Worldwide, millions of people transcending race, gender, and sexual orientation marched for a common cause. The Women’s March is a great example in today’s society of how powerful women are when they work together. 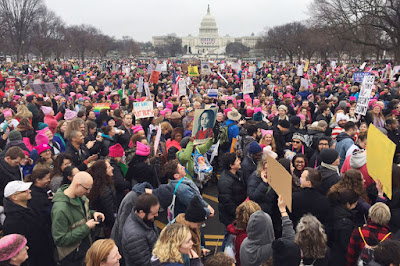 Above: About 440,000 attended the Women’s March in Washington, DC. Source: Holmes.
Sources:

Wu, Judy Tzu-Chun. Radicals on the road: internationalism, orientalism, and feminism during the Vietnam Era. Ithaca: Cornell U Press, 2013. Print.
Posted by Unknown at 3:18 AM