Nick Turse’s book Kill Anything That Moves: The Real American War in Vietnam depicts the US’ disregard of claiming their faults in the war crimes and massacres they have done to the indigenous people in Viet Nam. Instead, they have altered and silenced the voices of those they have caused harm to, to maintain its global status as the country that seeks only peace, prosperity, and a little bit of that Manifest Destiny. Some events in history that the US have claimed to have either “helped” and turned a blind-eye to are as stated: Khmer Rouge, My Lai Massacre, Balangiga Massacre, Philippine-American War, Bud Dajo Massacre, No Gun Ri Massacre, War on Terror, and many more that are left unsaid. As stated in the book, massacres during the Viet Nam War towards the citizens of Viet Nam were kept under the rug. For instance, the My Lai massacre, which accumulated to hundreds of deaths that consisted of murderous acts upon innocent civilians. This unforgiving act of atrocities was regarded as a US victory and was also neglected for more than a year until it could no longer be hidden from the public eye.
In recent events, President Rodrigo Duterte of the Philippines has openly expressed his resentment towards the US for their continuous military and political affairs in the Philippines since after the country’s independence from Spain in 1946. The Philippine’s had a well-organized army and government prior to US involvement. In fact, if the US did not interfere with Philippines’ newly growing government, the country would have had its own constitution and governmental laws. However, the US found themselves accountable to “tend” and “look after” the Philippines, in hopes that they can too, prosper and be civilized. The US saw their relationship with the Philippines in a manner that a mother would tend to her children. The reason as to why the US urged to stay and colonize the Philippines was to fulfill the notion of Manifest Destiny and that they must aid “our [US] little brown brothers” (Paddock). However, for the people of the Philippines to accommodate to the “American ways” they must take part in complete assimilation to fulfill the theology of Manifest Destiny. President Rodrigo Duterte acknowledges the horror and massacres that the US have done in the past, but all those events have only made his distaste towards the US more evident. President Rodrigo Duterte has stated in the past that he seeks to cut ties with the United States, but this will only cause economic and political distress due to the deep relations that both countries have with each other. Because of the US’ deep influence and history in the Philippines, separating the bond between the two countries may take years or even decades to accomplish. Not only have these changes of events strained the political relations between the Philippines and the United States, it has also caused worry within the Filipino-American community. Many Filipino’s have migrated and claimed their permanent stay in the United States, which can cause a major conflict if the Philippines were to completely cut ties with the United States.

Question: Why is the United States government so unwilling to acknowledge their wrongdoings and set things right by not repeating traumatic and inhumane acts of violence towards other countries? 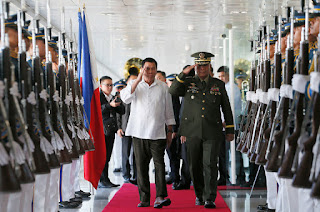 
Turse, Nick. Kill Anything That Moves: The Real American War in Vietnam. Henry Holt and Company. New York: Picador, 2013
Posted by Unknown at 2:35 AM