The Vietnam War was an extremely unpopular war for the US both domestically and internationally. The US military resorted to utter annihilations of Vietnamese civilian villages, killing indiscriminately without hesitation. Soldiers were trained to chase after one thing: body-counts. This top-down order debilitated the long-term mental well-being of these young troops and decimated thousands of innocent Vietnamese people. As reports of massacres committed by the US military spread domestically, the war grew increasingly unpopular throughout its course. However, those in charge of ordering such massacres were reprimanded. For what should have been over forty army personnel, only one scapegoat received the punishment in order to save American face.

This unfolding of events is not an outlier; rather, it is one of many. The US is able to escape from accepting responsibility for atrocious crimes committed abroad by manipulating events and their documentation. The 50th Anniversary Vietnam War Commemoration has a proposed budget of $100 million, but it is evident that this will be an easy way to "rewrite" history. The US military will not admit to atrocious war crimes and refuse to hold their leadership accountable for violations. This new commemoration is a reminder to be aware of the US's actions and speak up about them. Otherwise, future generations will be completely unknowing of the US's inclination toward total devastation of less developed countries. 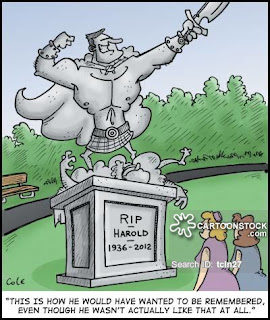 https://s3.amazonaws.com/lowres.cartoonstock.com/death-memorial-monument-statue-grave-graveyard-tcln27_low.jpg
Posted by Unknown at 8:49 AM