In the reading, Kill Anything that Moves: The Real American War in Vietnam by Nick Turse narrates the often hidden history of the My Lai massacre and all the other atrocities perpetuated by the U.S. soldiers (Turse 2). What was shocking is that the Vietnam War crimes were little-known by the public, that includes more than 300 allegations of “massacres, murders, rapes, torture, assaults, mutilations, and other atrocities substantiated by army investigators” (Turse 14). Growing up, I remember my parents tellin me how lucky I am to be a U.S. born citizen. They would talk about how Viet Nam was a poor country with little opportunity for social mobility. My parents do not talk much about the Viet Nam war, but I always thought that the U.S. was this great country with full of opportunities. However, as from the reading, the My Lai as an operation in which the American military and administration in Washington produced, that was not the case (Turse 23). In connection to the reading to current events outside class would be the crisis in Syria. Similar to war in Viet Nam, Syrian refugees are seen as objects of imperial benevolence and in need of saving from the United States. This good cause paints a good image of the U.S., while erasing the history of the war crime act and atrocities that the U.S. committed. 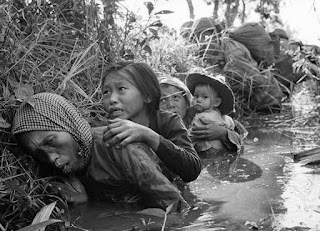 Question: Why is the U.S. repeating the same history again, given and knowing about this hidden side of history of U.S., and of their handling of the Viet Nam War?