In the book, Radicals on the Road: Internationalism, Orientalism, and Feminism During the Vietnam Era by Judy Tzu-Chan Wu, discussed the feminist movement for world peace during the Cold War. What was presented in the book were people who were considered “internationalists”—members of communities that transcended national boundaries. The objective of the book was to provide us with analogies of radicals who traveled the world to bring lights to their eyes of the injustices that the Western enacted upon the Eastern world, and that the West was not the savior. The US involvement in Southeast Asian countries reflects the caused as well as Indochinese women efforts to fight for liberation. Moreover, there was evidence that there was solidarity between North America and Southeast Asia, the in which solidarity was needed in order to build “international anti-war movement” (8). This relates to last week’s Women’s March on Washington. The Women’s March was about showing solidarity and in support of women’s rights, fight for full range of healthcare access and reproductive rights, and other related causes. In Chapter 9 Woman Warriors, impact of the war gives experiences and bodies of Asian women in understanding US militarization and empire (247) as well as the horrific nature of the US war.

Questions: Is there possibilities for effective change and sustaining long-lasting involvement in the long historical movement of activism? And if so, how? 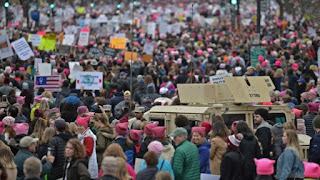 Demonstrators protest on the National Mall in Washington, DC for reproductive rights and women's rights, 2017

Introduction; Part III: Journeys for Global Sisterhood - Chapter 7 “We Met the ‘Enemy’--and
They Are Our Sisters,” Chapter 8 War at a Peace Conference, Chapter 9 Woman Warriors.

Wu, Judy Tzu-Chun. Radicals on the Road: Internationalism, Orientalism, and Feminism during the
Vietnam Era. Ithaca: Cornell UP, 2013.