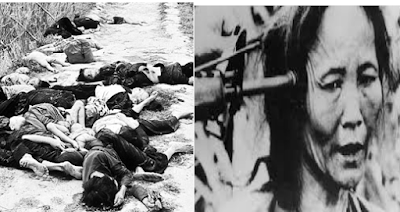 Where do I even begin, once I started this reading I was hooked, I felt the pain of the victims and cried as I read. This reading shocked me to the core, how these human beings’ actions could be so atrocious is beyond my belief. From what I have read, some major issues the SEA American community might be facing is lacking the insight to their history. From previous readings someone stated that they did not know their history because it was not spoken about at home. I understand where the older generation is coming from, after witnessing and being a part of such a brutal war, they face PTSD and talking about the war would just bring them back to those scary memories. My uncles who also were a part of the war and refugees themselves face PTSD and drink heavily to ease their minds. In addition, the reading also mentioned Vietnamese folks who are paraplegic and have disabilities, I think many of those who did come to America face many health issues that they pass onto their children because of Agent Orange. The issue with health includes affording health insurance or the issue of not having an interpreter or feeling comfortable with Western medicines. I know UC Davis has a clinic dedicated to the Vietnamese community called VN Cares and students learn the language and also interact with patients making them feel comfortable and welcome. I also think that, the War is not well represented in books because the Americans knew they were at fault but by taking ASA classes students can reclaim their history, learn about their ancestor’s pains and sufferings because it empowers students to get involved and bring to light the truth. My question is, were the killings not broadcasted? How come more soldiers did not come forward with their stories? How could this history be hidden, when there was so much atrocity, so much stories left unheard? This reading really pulled at the heart strings because it spoke about women and children being raped killed and mutilated; hoping there’s more readings like this one.