Viet Thanh Nguyen’s Nothing Ever Dies talks about how, quite simply, nothing ever dies, not memories, impacts of war, or even folks that have died. There are memories embedded in ideologies, monuments, policies, and many of the like, there are reasons for war that resonate to present day, particularly in the subjugation and control over countries that western powers deem as assets veiled behind protecting the people of said countries, such as Vietnam and Korea. Nguyen does an interesting thing by connecting th Korean and Vietnam War, which surprisingly enough, I find that I do not know enough, if at all, about the Korean War. But it is claimed to still be an ongoing war because of the separation of the North and South. I find this interesting, because that also plays into the pervading theme present in the novel. This war is also ongoing, still influenced by the United States, and truthfully, it makes me wonder about the role the United States has played in exacerbating the war in Korea and how might this alter our perception of the country, just as Korean Americans had been seen as the most ‘unsuccessful Asian group’ (131). It is interesting to consider since the interest in Korean culture has recently boomed with the popularization of K-pop.

I included the image of a Korean War memorial located in Washington D.C., because memorial hold a special kind of place in the present world, in which they represent a moment in history that the white hegemony would prefer to remember, whether it is right or not is another debate, however. But this is a testament of how things do not die, wars included. 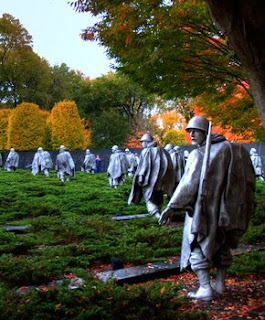 Image Used
https://washington.org/dc-guide-to/korean-war-veterans-memorial
Posted by Unknown at 3:20 AM