It is interesting how the books for our readings provide a different historical context into what happened before, during and after the war compared to the typical grade school history books. In the book, Nothing ever dies: Vietnam and the memory of war, the author, Nguyen, points out that yes, there is another story to what happened. Which story is the relevant one to be told, that remains to be the debate of what should come to surface. Nguyen points out, “each defined ethnic group in the United States gets their own notable history for which it is remembered by Americans” (Nguyen, 2016, p. 200). It is rather interesting because this dominant view of ethnic minorities is often the root cause of racial segregation between communities, stereotype and racism. In an attempt to shed light on Vietnamese American experiences during the Vietnam War, Nam, a writer in Nguyen’s book, wrote of his father’s experience during the Vietnam War, particularly the My Lai massacre. Nam hoped that this emic perspective will shed light of what Vietnamese Americans went through, another perspective that is not in the history books. However interestingly, his father reacted bitterly to the manuscript, burned it and left Nam dumb folded that some stories are meant to be untold.

The theme this week is forgotten, suppressed and invisible histories. As I reflect on this week’s reading and the previous readings, it is sad to see that so many stories are forgotten, suppressed and invisible. Even when given the opportunity to share or have stories told, the politics and ethics behind what can or cannot be shared only further hinders what really happened during and after the Vietnam War. No one wants to admit defeat, no one wants to be inferior, however pride prevents the truth to be unearthed, rather have images of war painted with stories of heroism and patriotism.

Is the past or the truth so painful that it is better to not share or speak about it? Do you think that invisible stories need to be told and set history right? 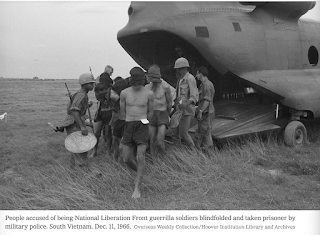 These people in the image are accused of being National Liberation Front Guerrilla soldiers. What do you think their stories were during the war that led to this moment, captured, blind folded and a prisoner of war?

References:
Nguyen, V. T. (2016). Nothing ever dies: Vietnam and the memory of war. Harvard University Press.