The concept of invisible histories for this week felt especially relevant upon reading Chapter 5 “On Becoming Human.” Although many of the stories surrounding the Vietnam War are suppressed and forgotten, it was a new a complete surprise for me to find out that South Korea was involved in the Vietnam War.  I was only vaguely aware of Korea being split into two countries around the 1940s. In addition to that, all I had heard from my Filipino father were stories about how South Korea had required a lot of help and training from the Philippines in order to re-stabilize its society and economy. However, I had absolutely no clue that “the country was so devastated by the war that in the 1960s it was poorer than South Vietnam.” (129) And while it was new information, it was not surprising to me that the United States lured South Korea into getting involved in the Vietnam war by taking advantage of the nation’s poverty to increase the amount of soldiers. It is very interesting to me that the author considers the Korean “Forgotten War” is the one that involved South Koreans in Vietnam and how they describe that the seemingly deliberate amnesia was compounded by its prominent entry into global capitalism. This fueled the first Hallyu wave, and another one is happening right now. As k-pop and culture once again surges through Asia and into the West, (which has dangerous orientalist stakes on its own), it is once again helping us to forget their history in their own country, as well as their history in ours as poor “failed” immigrants.

This is especially interesting to me because I have many international Korean friends and we have discussed history a lot, but none of them have ever mentioned the South Korean involvement in South Vietnam. Is it because of a deliberate forgetting mandated by whoever decides their history lessons in their home country? Or is it a slower and more potent form of social amnesia? What is its purpose? 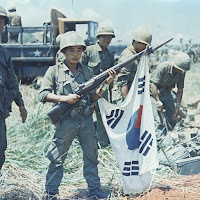 Source:
Nguyen, Viet Thanh. Nothing Ever Dies: Vietnam and the Memory of War. Harvard University Press, 2017.

Image source: wwiiafterwwii.wordpress.com
Posted by Unknown at 12:32 AM