The book Nothing Ever Dies: Vietnam and the Memory of War by Pulitzer Prize winning author Viet Thanh Nguyen is a piece of nonfiction that certainly does not sugarcoat. The book revolves around the Vietnam War and discusses the experiences of two groups which were involved within the conflict, the Koreans and the Vietnamese. Nguyen does not hold back when critiquing South Korea, and the way in which, like the United States, they attempt to re-narrate their involvement in the Vietnam War. Nguyen starts off by talking about how the war, in the eyes of Koreans, was a sort of ‘forgotten war’. Nguyen tells of the economic desperation that led to South Korea being involved in Vietnam, and how South Korea rose from that state of financial difficulty to the powerhouse that they are today through their media industry, or ‘Hallyu’ as it is commonly called. Through their media/pop culture industry, South Korea was able to reach new heights of economic success and global influence, and because of this, they were able to re-narrate their involvement within Vietnam. When discussing South Korean films on the topic of the Vietnam War, Nguyen points out that “while Korean commodities can be seen everywhere, memories of the Korean War in Vietnam are still hard to come by, even in their cinematic form.” (Nguyen 150), this further reinforces the fact that South Korea is trying it’s best to move on and forget about the war, that is their way of re-narrating.
After discussing the experiences of Koreans, Nguyen moves on to describe how the Vietnamese dealt with the war and the idea of ghosts. We, as readers, are invited to learn about how nowadays, Vietnamese people and Vietnamese Americans are telling the story of the war. We get a general sense that the Koreans are able to tell their side of the story much easier, that they’re able to re-narrate due to their economic power and cultural influence.


This reading relates to current events happening outside of the class because re-narration is all too common nowadays especially with the Trump administration, as Trump tries to re-narrate the perception of Mexican and Mexican Americans. 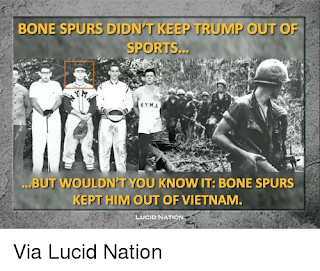 My question is: Why is it, that South Korea is so much more of an economic powerhouse than Vietnam ? When you consider the fact that Korea is still divided into the North and South and Vietnam is one unified country... it doesn't make sense how Vietnam is so far off.
Posted by Unknown at 1:48 AM