Nguyen discusses the concept of "becoming human", referring to how a nation's people and their struggles through poverty, illness, and warfare are overlooked when the nation is unsuccessful. For people to truly care, the nation must no longer be in poverty as a underdeveloped region. South Korea, for example, is similar to Vietnam in many ways. They were both extremely underdeveloped and looked upon pitifully by international spectators, especially the United States. Vietnam has shared most of Korea's pressing national issues but only measures up to a small sliver of its success. Although South Korea is now technologically advanced and in the international limelight, North Korea still remains in the darkness, unable to speak for itself against Western, and even bordering countries' narratives. South Korea's favorable position in the international community creates tension when juxtaposed with struggling North Korea or Vietnam. If it wasn't for the massive success and globalization of its commercial endeavors like K-Pop, plastic surgery, and Korean dramas, the rest of the world would not care about its history as shown with Vietnam.

Vietnamese people have wrote the most literature out of all Southeast Asians in America. Yet, these voices still remain largely unheard. Even though the US tends to boast about its multilingual, multicultural society, the stories and struggles of Vietnamese, and many other marginalized groups, remain unheard or uncared for. College-educated authors have more training and thus have the voice to speak up for their fellow Vietnamese. This is both a responsibility and a burden, as this exposes the author to criticism from both their own community and the American community. Those who make it into the limelight are often put under extreme scrutiny and are heavily criticized.

In the pursuit of accurate historical accounts, what can be done to further the cause? (i.e. increased budgets for memorandums with direct contributions from the marginalized communities of interest?) 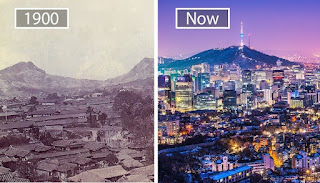 Photo Source
Posted by Unknown at 8:18 AM