Prior to reading the few chapters in “Scorched Earth” by Fred Wilcox, I didn’t really know much about Agent Orange and its impact on the Vietnamese population that was exposed to this chemical. As the author mentions, “it is a tragedy that has been killing people for decades” (3). With the rapid mortality rate, many people especially Vietnam veterans are dying due to the chemical’s extent of harm. Despite the horrendous outcome, laws that exist do not really do much about it, which has impacted the lives of many agent orange victims greatly. It is interesting to note that while some manufacturing companies knew of the effects of the chemical on people, the companies still sold the Agent Orange to the military to use. This makes me question whether if it’s the government’s fault at ultimatum or that of the corporates’. But regardless, discounting whose fault it was for the aftermath of the effects of the chemicals, this incident should be more widely recognised. It is upsetting to know that the US military resulted to this ‘scorched earth strategy’ against an enemy in war and poisoned its own army too. What is more disturbing is little efforts are taken to accommodate the victims of Agent Orange. The effects of the chemicals that got exposed has really taken a toll on families as the problem has not been completely solved, resulting a reoccurrence of the disease amongst multiple generations. Issues like Agent Orange in Vietnam is very concerning as it depicts how powerful some nations like the US can be. They have the power to harm masses of people with one single go and if they really want to, they can wipe out and infect groups of people. With Southeast Asian countries being viewed by Western perspectives as subordinates to the Western world, what if issues like Agent Orange occurs to other countries as well. If we examine other wars that the US has been involved in such as the Gulf War, there are some illnesses associated with these wars too. 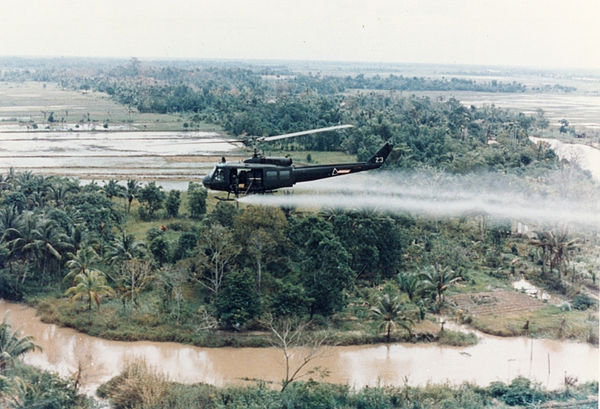 
Picture: https://en.wikipedia.org/wiki/Agent_Orange
Posted by Unknown at 6:08 AM