Transnationalizing Viet Nam by Kieu-Linh Caroline Valverde speaks of the Vietnamese diaspora as a unique experience, yet it is often overshadowed by a monolithic identity that continues to spread which causes conflict across generations. The assigned reading focuses on two cases in particular; Chau Huynh’s controversial artwork, and past councilwoman Madison Nguyen’s up and then down relationship with the Vietnamese community in San Jose.
Councilwoman Madison Nguyen came at war with the community that once adored her when she didn’t support them in naming a business center “Little Saigon”. She made her decision in hopes of compromising, and wanting to represent the current and contemporary Vietnamese American community. However, her diplomatic selection was met with backlash and she was labeled a communist by the people who provided her with support throughout her political career. The group that once stood for her started a campaign to oust her which rooted in protest, boycott, and harsh rhetoric (Valverde). It was mentioned that those who participated in the pro-Little Saigon movement were part of an older generation, whose beliefs included representing the refugee experience, freedom, and nationalism, all of which can be translated to anticommunism. Although their beliefs are valid, it does erase and does not make room for those who are also part of the growing Vietnamese American community which is an issue that has been happening for quite some time. Stated in the text, “the older generation wants to speak for a history that needs preservation, whereas the younger generations calls for recognition of the realities of the current condition” (Valverde 136).

Question: San Jose has just banned the communist Vietnamese flag, has there been any counter protest or has the policy been met with unanimous support from the public? 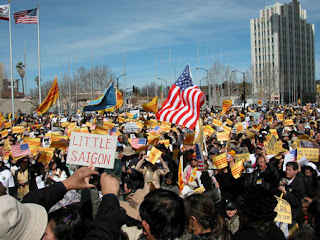