Jaselle Abuda
Professor Valverde
ASA 150E
11 February 2017
Professor Caroline Valverde’s book Transnationalizing Viet Nam: Community, Culture, and Politics in the Diaspora notes the disagreements, conflicts, and personal experiences within the Vietnamese-American community in the U.S. and the Vietnamese community in Viet Nam. While reading the text, I was surprised of how much of a gap between the Vietnamese and Vietnamese-American’s had between each another. Twisting of words, threats, and protests with one another made me think of how much of the bond between the two have truly separated. The objective of ‘unifying’ the nation of Viet Nam was not successful due to the fact there is now a silent divide in the nation. Rather than talking about the Viet Nam War and how the traumatic event relates to U.S. intervention, no one seems to be speaking their thoughts and experiences of the matter. However, through all this pain and miscommunication, the art pieces that Chau Huynh created for her mother and mother-in-law, represented her love and devotion for these two resilient individuals. Art can be interpreted in many ways, but misinterpretation and judgement can come between people causing conflict and hatred with one another. Chau Huynh’s pieces were discriminated and heavily critiqued because of the misunderstanding of it being procommunist. I think this disagreement could have been avoided if people stopped to listen and soften their hearts to the artists’ true intentions of ‘unifying’ the two damaged bridges of people in Viet Nam.
All in all, I found this reading educational in properly carrying out the personal experiences, disagreements, good intentions, and unconditional devotions of one’s self to their own country. That, in its self, is amazing. 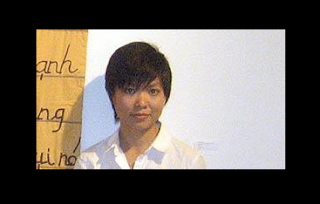 Question: I would like to just know has there been any improvements within the two Vietnamese communities, both here in the U.S. and in Viet Nam?