This week’s reading from Professor Valverde’s book “Transnationalizing Vietnam” opened my eyes a lot about a part of Vietnamese history that I was not well-versed with. As a Vietnamese American woman, whose parents came to the U.S. during the 1990, I still do not know the terms about my parent’s arrival here. This reading gave me context about the ODP, and I think this is what my parents got here by since they were not “boat people.” It was interesting to realize that Vietnamese people had prejudices against each other. Finding out that the higher educated Vietnamese people called the next wave of Vietnamese immigrants “FOBs” was shocking to me because I thought the term came from only outsiders who wanted to discriminate against Asians. I did not know that it was used by other Vietnamese people who wanted to distinguish themselves from poor, less educated Vietnamese. This example was important in showing that racism can happen from your own people as well.
In chapter 4, Professor Valverde talked of Chau Huynh’s Connections art piece, which involved “three pedicure basins painted yellow with three red stripes in each to signify the RVN flag. Yellow electric cords from the basins converge to a red electric socket” (Valverde, 94). This piece was meant as a tribute to her mother’s hard work and devotion to her family. However, the media blew it up and accused her of communist propaganda, “calling her names, criticizing her physical looks, and using sexual epithets” (95). It is unfortunate to see how other members in the community critiqued her work in that way without even bothering to pay attention to her true intentions to the piece. Personally, I appreciated the work because it reminded me of my own family and how my mom also slaves away at a nail shop every day of the week, with little to no vacation time. Seeing my mom being exploited by the system pained me. The media really has its ways twisting others’ work without caring for what the artist intended. 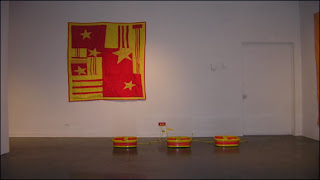