In the book Transnationalizing Viet Nam, Professor Kieu-Linh Caroline Valverde describes the relationship between Viet Nam and its diaspora. Even though the Vietnam War was over 42 years ago, this infamous history period still leaves a painful scar in many Vietnamese people, especially those who escaped the country after the fall of Saigon. Given the controversial art exhibit of Vietnamese American artist Chau Huynh as an example, as soon as the current Vietnamese flag appears, there will be protest or even violence sparks by anti-communist Vietnamese group. In fact, these protests are very normal, especially very time any Vietnamese communist leader visits the United States, protests take place in many cities with large Vietnamese population. These protests are always not reported by the Vietnamese national television.
With the growing of the Vietnamese population in America, which was 1,548,449 or 0.5 percent of the US population in 2010, the Vietnamese community today not only prove themselves to be an example of American Dream achievers, but also let their voice into the politics. In 2011, Madison Nguyen became the vice-mayor of the city of San Jose, the first Vietnamese city councilwoman in the United States. Most recently, in 2016, Florida Democrat Stephanie Murphy made history by becoming the first Vietnamese-American woman elected to Congress. 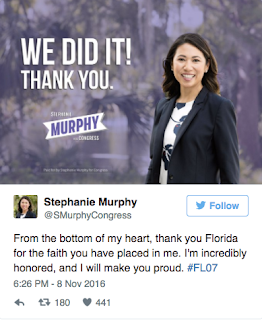