In “The War after the War” the introduction is about the Fall of Saigon, which is when the Vietcongs take over Saigon on April 30th, 1975. This was the end of the war but the start South Vietnamese civilians escaping the communist regime and the Americans pulling out their troops and helping some civilians flee. This was a major victory for the communist party as it expanded into Cambodia. The Indochina War included Vietnam, Laos, Cambodia, and China and though the Vietnam War was still over the U.S. was still meddling into these countries’ agendas. It was almost like a domino effect however. These countries were so strongly interconnected that if something were to happen to one country it would affect the other countries too. China eventually got involved with Vietnam and Cambodia even providing aid to Cambodia. China invested in these two counties almost like a slap in the face to U.S. for their embarrassing loss. China was different with Vietnam in the sense that China did not want Vietnam to be the leader of Indochina so in contrast to Cambodia, China would stop providing aid to Vietnam. The most recent war was the Iraq War where we also ended up pulling our troops out. My question would be: Would the end of the Vietnam War be the same if the U.S. troops weren’t involved? 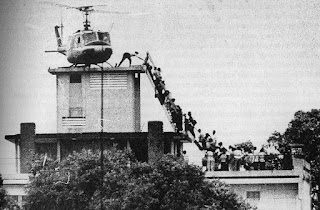