Following the strife of the Vietnam War came even more warfare. Nayan Chanda speaks to how longstanding and hidden rivalries between China and Vietnam and Vietnam and Cambodia finally manifested into a subsequent war. There were both political and territorial motivations; the Khmer Rouge challenged Vietnam's control of islands in the Gulf of Thailand through physical occupation. The Vietnamese fought back with ferocity and eventually caused the Khmer Rouge to retreat. The root of this conflict, however, was not simply a desire for territorial acquisition. Rather, it lay in the overawareness of the border issue and the intense nationalism from both countries. Following this incident came other acts of aggression between China, Vietnam, and Cambodia. Ironically, the Vietnamese, following its colonization by China, felt a deep reverence for Chinese culture with permeating knowledge of Chinese classics and practicing Chinese calligraphy.

Amidst this Sino-Vietnamese warfare and bloodshed stands an intimate knowledge and awareness of each other. China was highly aware of Vietnam's potential influence of Indochina, especially following its unprecedented victory against the US military, the strongest military in the world. In addition, it formed a strong dependence on Moscow economically and militarily. China viewed Vietnam as an imminent threat that must be contained. This is extremely reminiscent of the US's involvement in the Vietnam War. As the Soviet Union increased its influence of Communism in Eastern Europe, Vietnam became vulnerable. Seeking to prevent Soviet dominance of Vietnam and thereby curbing its communist sphere of influence, the Vietnam War was fought as a pawn between two global powers.

Question: What options did the Chinese have to obtain the same (if not better) results of containment of Vietnamese influence? How might diplomatic relations be exercised to prevent subsequent strife and warfare? 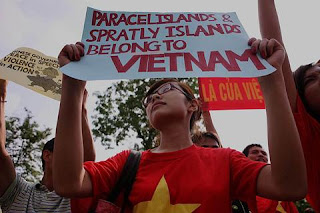 Photo Source
Posted by Unknown at 8:41 AM