Viet Thanh Nguyen’s Nothing Ever Dies: Vietnam and the Memory of War illustrates the forgotten wars of the Korean War and the Viet Nam War, which both countries’ histories once intersected. Korea’s involvement in the Viet Nam War benefitted the country’s economic and political status after agreeing to have its army be used in South Viet Nam. After receiving so many devastating attacks from the American military and various countries army militias, Korea was in ruins. Many searched for the ‘American Dream’ in America, but that ideology did not necessarily apply to people of color. Instead, Koreans in the U.S. became “the model for the rest of America’s ‘unsuccessful’ minorities and immigrants” (Nguyen 5). They have been marginalized as being the model minority and the physical embodiment of “the American ethos of self-driven capitalist success” (Nguyen 5). Developments in South Korea’s economy improved drastically compared to Viet Nam’s suffering capitalist government. As Viet stated, “They [South Koreans] are no longer ugly and sad objects of pity or subject of terror that people once saw in the world’s newspapers during the years of obliteration” (Nguyen 7). The Viet Nam war influenced the growth of South Korea’s development of becoming a capitalist and industrial country, thus reflecting to the military-industrial complex.
To connect to similar events associated with the forgotten wars related to America’s military-industrial complex, the Philippine-American War can be put into discussion. Instead of giving the Filipino’s their land after helping win the war against the Spaniards, the U.S. conquered in terms of an ‘agreement’ or ‘friendly-consensus’. Influence of U.S. hegemony over the country is still so evident in today’s Philippines society, which many have accepted or rather assimilated to. The U.S. has not only influenced their way into the Philippines’ military and politics, but has also heavily influenced the educational system and social growth of the nation. 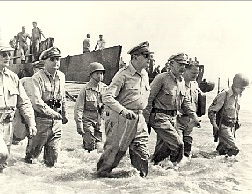 Question: As Viet Thanh Nguyen mentioned in the book that not many [South] Koreans know of their country's affiliation in the Viet Nam War. I am very curious as to what 'facts' that the South Korean education teach their citizens about their nations history, specifically the Viet Nam War. Is there a lot of censorship in those areas in history (etc.)?


Nguyen, Viet Thanh. Nothing Ever Dies: Vietnam and the Memory of War. Cambridge, MA: Harvard UP, 2016. Print.