Transnationalizing Viet Nam by Caroline Valverde made for an insightful narrative into “the complex interconnectedness of the United States, Viet Nam, and staunch anticommunist Vietnamese in diaspora” (146). Several recurring themes were woven throughout the text threading together aforementioned interconnectedness. Themes of fear, stagnation, and control serve as the underpinnings of tension within the diaspora.


Many within the diaspora fear being labeled as a communist or “not adhering to the anti-communist dogma” in conjunction with the protests and hostility that follow suit (111). In fairness, “the anti-communists themselves are also afraid. At the core of all of the protests lies fear, fear that one’s history and experiences will be forgotten and one’s suffering will not be remembered” (112). And lastly, “the fear is that if members of the community are influenced by alternative ideas, they will not subscribe to a unitary history” (100). Valverde asserts that this fear is translated into suppressed and muzzled ideas and voices that create a community stagnant in several ways including creativity, art, and politics. “The effort to hold on to one truth, history, and experience effectively brings the community to a standstill” (112). These efforts of a controlled media and any sort of alternate idea by censoring all opposition to the one unitary history of anti-communism is ironic. Ironic because “our shared history may be manipulated to legitimize certain ideas” (144). As a result, tension arises and others feel restriction in openly and safely expressing and revealing their thoughts on differences. Throughout this text, Valverde outlines the tensions and struggles that have risen in the diaspora and how those issues have shaped the diverse culture of the diaspora today. 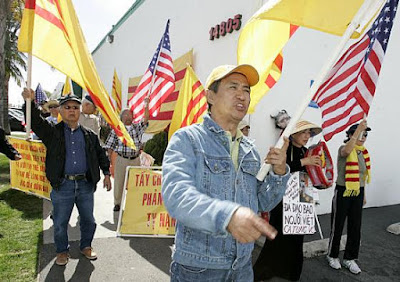 "Trong Doan, center, leads a protest across the parking lot from Nguoi Viet Daily News in Westminster Tuesday to push for a public forum to air grievances regarding a photo that ran in the newspaper." Image Source: http://www.ocregister.com/articles/viet-126247-protests-newspaper.html

"Protestors yell out slogans against the Viet Weekly magazine in Garden Grove alleging that the publication is pro-communist." Image Source: http://www.ocregister.com/articles/viet-126247-protests-newspaper.html
Tension from differences is not only pertinent in the diaspora, but also today. As I scroll through my Facebook feed past a half dozen news articles and another half dozen friend’s posts about something Trump said or did that was outlandish, I am almost sure to find hostility and conflict present in the comment section. I am not alone when I also say that there is a likely chance the labels "liberal" and "conservative" will be thrown around with derogatory remarks. In my picture below, last week’s author Viet Thanh Nguyen is seen on the Late Show with Seth Meyers. Nguyen talks about immigrants and refugees, as well as his own lived experience as a refugee and how he has turned his experience around into success with a Pulitzer Prize. It is relevant to note that there is no mention of Trump, his recent antics, or the fight against his immigration ban. The brief interview also plugs Nguyen's newly released book The Refugees. Upon scrolling through the comment section, you find (from a Trump support) an unfavorable association and assumption that USC (the source of the post) is anti-Trump. We can relate this back to the readings where any expressed idea that was perceived as not anticommunist enough was labeled pro-communist. 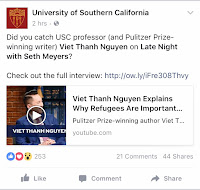 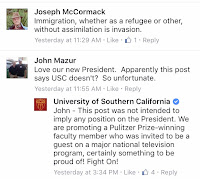 Question: What steps can we as a society take to better accept differences of ideas and opinions so that a history of tension and hostility does not continue?
Posted by Unknown at 4:13 AM